The Age of Obsolescence: Senescence and Scientific Rejuvenation in Twentieth Century America 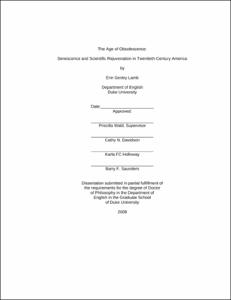 Growing "old" in contemporary American society often means being seen as a problem: you threaten the stability of Social Security and Medicare; cutting-edge science seeks a cure for what ages you; cosmetic companies and health magazines sell you products and strategies for holding on to your youth as long as possible. The Age of Obsolescence: Senescence and Scientific Rejuvenation in Twentieth Century America traces the emergence of these attitudes toward old age back to the turn of the twentieth century when a publicly shared conception of aging was emerging in relation to advances in science and medicine, industrialized labor practices, a slowly developing welfare state, demographic observations of increased life expectancy, changing gender roles and expressions of national identity. During that time, the quest for the fountain of youth shifted from the stuff of legend to a driving motivation behind modern science.

In the four chapters of this dissertation, I bring literary critical methods to bear on literary and scientific texts, public health tracts, journalistic accounts, advertisements and public records. Through this survey of science, government and popular culture, I document the formation of several cultural narratives of aging--or, formulaic ways of addressing aging produced by repeated metaphors, imagery and story lines--that circulated with reciprocal influence through all of these spheres, determining attitudes toward, and experiences of, aging at that moment and into the present. After briefly exploring our contemporary "anti-aging" culture, the four chapters of The Age of Obsolescence address the framing of a moral responsibility for aging individuals to "take care of themselves" as a duty to their nation; the association of aging with obsolescence and its influence on worker's experiences and industrial practices; the scientific and cultural construction of aging as a disease in need of professional intervention; and the proposed "cure" for this problem of aging: scientific rejuvenation, particularly the glandular rejuvenation fad of the 1920s. My conclusion traces this fervor for scientific rejuvenation into the present, showing how the turn-of-the-century cultural logic of aging has become a taken-for-granted framework of American popular culture today. In illuminating the historical moment when the "problem" of aging was located in the bodies of aged individuals, I point toward solutions that may arise not from scientific discovery, but from rewriting these cultural narratives of aging and old age and restructuring the national practices that stem from them.