Leftovers from the British Empire: Stories from Post-Colonial India - A Memoir 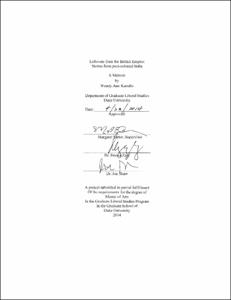 View / Download
7.6 Mb
Date
Author
Kamdin, Wendy Ann
Advisor
Sartor, Margaret
Repository Usage Stats
1,268
views
1,121
downloads
Abstract
This Project is a memoir, a collection of stories of the places I’ve been, the people that populated my life, and events both historical and personal that drew my course. I grew up in India, a child of the early 1950’s, an India fresh out of its colonial past, when the remnants of the British Empire still lingered on. My mother’s family traced their antecedents through several generations of British civil servants who lived, worked and settled in India. My father’s parents were immigrants from Russia who settled in Brooklyn, New York. My experiences led me to explore and reflect on the cultural and historical milieu I lived through, during my childhood, early adulthood, later adulthood, across continents, and through the vagaries of history that took me back to and kept me in India a while longer than expected. My stories afford amusement and have instructional value, about, among other things, life in India, its flora and fauna, the emotional life of humans, marriages good and bad, and child rearing – how not to do it, and how to attempt to do it as well as circumstances allow.
Type
Master's thesis
Department
Graduate Liberal Studies
Permalink
https://hdl.handle.net/10161/9241
Citation
Kamdin, Wendy Ann (2014). Leftovers from the British Empire: Stories from Post-Colonial India - A Memoir. Master's thesis, Duke University. Retrieved from https://hdl.handle.net/10161/9241.
Collections
More Info
Show full item record