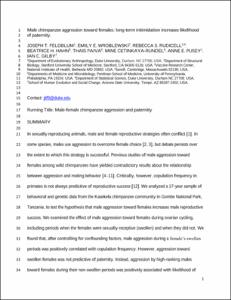 Files
Submitted version
405.6 Kb
Supporting information
314.4 Kb
Supporting information
4.3 Kb
Date
Authors
Feldblum, J
Wroblewski, E
Rudicell, R
Hahn, B
Paiva, T
Cetinkaya-Rundel, M
Pusey, A
Gilby, I
Show More
(8 total)
Repository Usage Stats
318
views
498
downloads
Abstract
In sexually reproducing animals, male and female reproductive strategies often conflict. In some species, males use aggression to overcome female choice, but debate persists over the extent to which this strategy is successful. Previous studies of male aggression toward females among wild chimpanzees have yielded contradictory results about the relationship between aggression and mating behavior. Critically, however, copulation frequency in primates is not always predictive of reproductive success. We analyzed a 17-year sample of behavioral and genetic data from the Kasekela chimpanzee (Pan troglodytes schweinfurthii) community in Gombe National Park, Tanzania, to test the hypothesis that male aggression toward females increases male reproductive success. We examined the effect of male aggression toward females during ovarian cycling, including periods when the females were sexually receptive (swollen) and periods when they were not. We found that, after controlling for confounding factors, male aggression during a female's swollen periods was positively correlated with copulation frequency. However, aggression toward swollen females was not predictive of paternity. Instead, aggression by high-ranking males toward females during their nonswollen periods was positively associated with likelihood of paternity. This indicates that long-term patterns of intimidation allow high-ranking males to increase their reproductive success, supporting the sexual coercion hypothesis. To our knowledge, this is the first study to present genetic evidence of sexual coercion as an adaptive strategy in a social mammal.
Type
Journal article
Subject
Aggression
Animals
Copulation
Female
Male
Pan troglodytes
Paternity
Sexual Behavior, Animal
Tanzania
Permalink
https://hdl.handle.net/10161/9269
Published Version (Please cite this version)
10.1016/j.cub.2014.10.039
Publication Info
Feldblum, J; Wroblewski, E; Rudicell, R; Hahn, B; Paiva, T; Cetinkaya-Rundel, M; ... Gilby, I (2014). Sexually coercive male chimpanzees sire more offspring. Curr Biol, 24(23). pp. 2855-2860. 10.1016/j.cub.2014.10.039. Retrieved from https://hdl.handle.net/10161/9269.
This is constructed from limited available data and may be imprecise. To cite this article, please review & use the official citation provided by the journal.
Collections
More Info
Show full item record Professor of the Practice of Statistical Science
I am a Professor of the Practice and the Director of Undergraduate Studies at the Department of Statistical Science and an affiliated faculty in the Computational Media, Arts, and Cultures program at Duke University. My work focuses on innovation in statistics and data science pedagogy, with an emphasis on computing, reproducible research, student-centered learning, and open-source education. I work Assistant Research Professor in the Department of Evolutionary Anthropology James B. Duke Distinguished Professor Emerita of Evolutionary Anthropology
I have recently retired and am not taking on new students although I am continuing some research projects.  I am interested in understanding the evolution of sociality, social structure, and the patterns of competition, cooperation and social bonds in animal species, including humans. Most of my work has focused on social mammals: lions and chimpanzees. For the last twenty five years I have worked almost exclusively on the long term Gombe chimpanzee project. I have gathered the data
Alphabetical list of authors with Scholars@Duke profiles.