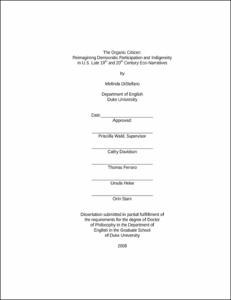 The Organic Citizen investigates an underlying environmentalist sensibility that links texts and discourses from varied realms and disciplines - Indian reform, environmental policy, social reform, ecology, sociology and legislation. I contend that, taken together, these works narrate an ecological vision of national affiliation: a concept of the nation as an ecological, natural zone of interdependence and its citizens (or non-citizen inhabitants) as members of this environmentally-conceptualized nation. This shared narrative of natural collectivity gives rise to what I call an "organic citizen" - the literary-political figure of an individual imagined to be a natural member of an ecological national body. I show that this concept of eco-citizenship both informs and is informed by contemporaneous concepts of indigeneity (what it means to be native) and by the actual political positioning of the American Indian in the U.S. citizenry throughout the century.

In five chapters, I argue that environmentalism is a site in which subjectivity is shaped, initially establishing modes of assimilative collectivity at the turn of the last century and later providing a realm in which the terms of subject affiliation may be analyzed and revised. I show how environmentalist discourse is profoundly connected to democratic practice and membership and how it formulates models of citizen collectivity. I contend that this discourse encompasses significantly more than a narrowly defined set of conservationist concerns for ecological entities, and can be used as a site of activism. Certain forms of stories - narratives that question these terms of national affiliation- expose the nuances of environmentalist thought. This type of storytelling offers a means through which environmentalist thought can become a realm of citizen engagement or activist possibility, opening access to and agency within a participatory democracy. An examination of this eco-narrative, I suggest, provides useful insights into how land use and rhetoric give definition to the way U.S. citizenship is socially imagined, legally adjudicated, and independently or communally practiced in a democratic system.

The first chapter examines the simultaneous emergence of wilderness narratives with the science of ecology and discourses concerned about national and geographical assimilation of communities and individuals of ethnic difference. I draw upon the writings of social reformers, particularly Jane Addams, ecologists Henry Chandler Cowles and Frederick Clements, and environmentalists John Muir and Gifford Pinchot. Together, I argue they demonstrate how immigrant and impoverished subjects living in urban zones were rhetorically imagined and physically and metaphorically associated with natural entities. I contend that this literal naturalization makes immigrant presence less threatening to a national collective by converting these bodies and places into natural resources to be consumed for nationalist purposes. This version of citizenship imagines collectivity as a form of organicism, a process by which foreign subjects and non-citizens can be incorporated into a citizenry as natural resources while not necessarily legally constituted as citizens of the nation.

While the rhetoric surrounding land use began to take new political, constitutional and sociocultural form in the first wave of a formal environmental movement, there simultaneously was a dramatic jurisprudential shift in Indian status in the U.S. This chapter explores how the formulation of an "organic citizen" at the turn of the century draws upon circulating concepts of indigeneity. I bring together Indian reform policy, specifically the Dawes Allotment Act, environmental policy, particularly the Antiquities Act, and fictional writings by Mary Austin and George Bird Grinnell. These narratives demonstrate the consistency with which American Indians were imagined as organically connected to natural lands. I argue that the result is a concept of indigenous organicism that is predicated upon the Indian being publicly, although uncomfortably, imagined as a natural constituent of a citizenry and Indian land as a natural part of a national body. Chapter Three examines the fictional and political writings of Zitkala-Sa and Charles Eastman to consider how they use stories and their public roles to analyze the legal and discursive connections between an environmentalist sensibility and concepts of indigeneity. I contend that Eastman and Zitkala-Sa begin to use a language of rights and democracy within this eco-discourse as a way to insert the native as a rights-bearing citizen in the U.S. nation, putting forth a race analysis that ultimately disrupts the idea of ecological assimilation prevalent at the time. Reading their work alongside key environmental policies, like the Organic Act of 1916, Indian reforms, like the Citizenship Act of 1924, and Willa Cather's novel The Professor's House highlights the persistence of a concept of natural indigeneity that continued to be narrated even after American Indians are given legal citizenship.

Eastman's and Zitkala-Sa's use of the environmentalist/native link as a means for race critique falls out of environmentalist thought and practice in a critical moment of transition in the environmental movement. Their use of storytelling and sense of political right, however, lays the foundation for the type of environmental narrative that emerges with the second stage of the environmental movement. My fourth chapter shifts to this moment, focusing on Aldo Leopold's A Sand County Almanac (1949) and Rachel Carson's Silent Spring (1962). I argue that both authors use an environmental narrative, particularly storytelling, as a means to imagine citizen engagement in a participatory democracy. However, while Leopold and Carson incorporate a language of political rights, they do not carefully factor into their versions of national/ecological belonging and action the ways in which race and class identities affect the social, political, and legal standing of various subjects within the eco-nation.

My final chapter explores how a race and class critique in environmentalist thought and politics returns in the last quarter of the twentieth century. I draw from significant legislation and Supreme Court opinions that explicitly defined the political rights of ecological objects and species, such as Sierra Club v. Morton, the Endangered Species Act, and a series of legal battles that emerged around the construction of the Tellico Dam, particularly the Cherokees' resistance to its development. These documents and cases deliberate over the political standing and rights of natural, non-human entities, but they circumnavigate engagement with questions of political standing for geographically and socially marginalized human citizens in the U.S., although this issue is implicitly present and strategically drawn upon in their arguments. This lost component takes shape and political articulation in the following emergence of the environmental justice movement. The politics of voice - "speaking for oneself" - that emerges particularly out of indigenous environmental justice movements highlights the use of storytelling as an activist practice. In their careful novelization of environmental activism, Linda Hogan's Solar Storms (1995) and Ruth Ozeki's All Over Creation (2003) not only pinpoint the interconnections, but also the injustices that arise out of the way human and ecological subjectivities are legally and culturally constructed. I argue that both authors use the literary form to model how stories and the act of storytelling allow for the articulation of and/or resistance to certain terms of national affiliation. Both Hogan's and Ozeki's novels bring forth an expanded sense of environmentalism, showing that storytelling can redefine our roles as U.S. citizens and position ourselves as active agents in democratic discourse, policy-making and change.

We are living in another pivotal moment of environmentalist thought as new attention is given to the way environmental conditions are deteriorating and as popular culture begins to take interest in these issues. It is crucial that Literary Studies rigorously engage with these issues to examine the kinds of narratives being generated. While Ecocriticism and Native American Studies have remained somewhat marginalized from the core of Literary Studies, this project (particularly in this moment) argues that these types of criticism and theory have an imperative role to play in illuminating narratives of identity, nation, and citizenship.