Beijing Migrant Education: Challenges and Prospects in Light of the Five Certificate Policy 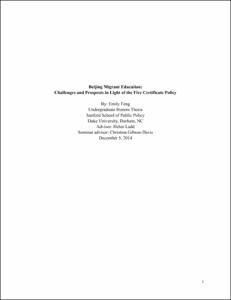 View / Download
739.5 Kb
Date
Author
Feng, Emily
Repository Usage Stats
1,176
views
933
downloads
Abstract
Today, approximately 23 million migrant children live in China’s cities. However, China’s anachronistic household registration system (hukou system) prevents migrant workers and their children from accessing public benefits like public education. In response, private entrepreneurs began opening private, illegal schools for migrant children in cities like Beijing and Shanghai in the early 1990s. In January 2014, the Beijing government began implementation of the “Five Certificate Policy,” which provides a pathway for migrant students to obtain a public school enrollment number but only after they have secured a set of five “certificates,” or items of paperwork, to qualify. In this study, I interviewed migrants and researchers to determine the greatest challenges presently faced by migrant schools and how those challenges are translated to their students in Beijing. I also interviewed migrant parents and teaches on the consequences of the Five Certificate Policy and collected further information about student enrollment and policy provisions. The great challenges faced by migrant educators and students stemmed from the resource scarcity and precarity of the migrant schools. Furthermore, an analysis of the Five Certificate Policy reveals that its implementation differ from district to district within Beijing itself. The policy opaqueness and difficulty in meeting all of its provisions has increased the exclusion of migrants from the public education system and further disrupted educational pathways. Moreover, it has contributed to the precarity faced by migrant schools, exacerbating preexisting resource scarcity problems. Going forward, the Beijing government should standardize the Five Certificate Policy system, provide resources for migrant students who wish to apply to school enrollment in their home provinces, and look to incrementally incorporate migrant schools into the public education system. In the long term, as China continues to urbanize and develop smaller, inland cities, the national government should invest in the economic development of these cities and the education systems within them so as to create more even distributions of opportunity for all of China’s citizens.
Type
Honors thesis
Department
Public Policy Studies
Subject
China, education, migrant, Beijing, hukou
Permalink
https://hdl.handle.net/10161/9297
Citation
Feng, Emily (2014). Beijing Migrant Education: Challenges and Prospects in Light of the Five Certificate Policy. Honors thesis, Duke University. Retrieved from https://hdl.handle.net/10161/9297.
Collections
More Info
Show full item record