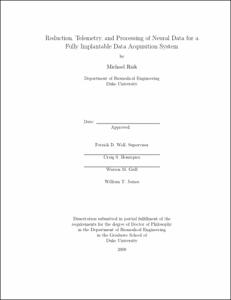 Cortical brain-machine interface (BMI) systems as they currently exist within the research environment are not suitable for general clinical use. A clinical system must be fully implantable, requiring no chronic breaks in the skin. This work addresses the communication and processing needs of a fully implantable neural data acquisition system. Such a system is a key component of a clinically viable BMI. This work primarily focuses on the design, implementation, and testing of a data reduction scheme for 96 channels of neural data and a bidirectional telemetry link for sending data out of the body and providing commands and configuration information to the implanted portion of the system.

The data reduction scheme and an interface to a one megabit per second commercial transceiver were implemented in a single programmable logic device. The data reduction scheme makes use of a voltage thresholding spike detection technique. The threshold for each channel is computed automatically based on a user-defined multiplier and an estimate of the noise level. The interface to the transceiver performs all necessary serial encoding and decoding, queuing, and packet assembly and disassembly.

The data reduction portion of the system was tested using simulated neural signals. Spike detection performance was evaluated using thirty different multiplier values over a wide range of signal-to-noise ratios. Spike extraction tests showed that the system could output up to 2000 extracted spikes per second with latencies suitable for a BMI application. The circumstances under which some spikes would not be transmitted by the system were also characterized. Finally, an investigation of automatic threshold selection methods suitable for a BMI application was conducted. The results suggest that the spike detection technique used in the data reduction scheme is appropriate for this application.

The neural data acquisition system has been fully implanted in several sheep and has successfully recorded, processed, and transmitted neural data during these experiments. The system is also shown to interface well with commercial spike sorting software and with all of the necessary components of a BMI setup, demonstrating suitability for integration into systems that have already been shown to be effective in the laboratory environment.