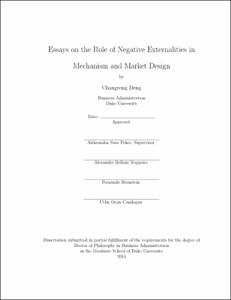 This dissertation focuses on understanding how negative externalities affect managerial decisions, specifically, the resource allocation and pricing in competitive environments.

We first study optimal allocation and pricing on a network of competing buyers. Buyers have private information about the value of an item being sold (such as franchise contract, good, service). Furthermore, buyers place a premium on obtaining the item exclusively, i.e., if no competitors obtain the item at the same time. We show that the seller limited to offering posted price contracts should inflate the price in order to maximize revenues and capture the value buyers put on exclusivity. However, posted prices are not revenue-maximizing and there are theoretical barriers to discovering generic optimal allocation and pricing schemes, stemming both from mechanism design theory and computational complexity theory. We present an easy-to-implement hybrid auction-pricing procedure which revenue-dominates posted prices and is optimal in a full competition setting.

Finally, we consider the setting where the scope of negative externalities is limited. A revenue-maximizing monopolist is selling a single indivisible good to buyers who face a loss if a rival buyer obtains it. The rivalry is modeled through a network, an arc between a pair of buyers indicates that a buyer considers another buyer its rival, and the magnitude of the loss is the private information of each buyer. First, given a network, we characterize the optimal mechanism. Second, we show that revenues depend on the network structure. Thus, in applications where it is possible, the monopolist might consider designing not only the mechanism but also the network (if not fully, at least partially). Third, we provide solutions to this joint network and mechanism design problem. Specifically, we determine revenue-maximizing rivalry networks (which in turn induce optimal mechanisms), and show that they are independent of distributional assumptions on buyers' independent private loss values, provided virtual values are bounded from zero. We achieve these results under different restrictions of how the monopolist can affect the network. When rivalry is symmetric, matchings are optimal (with at most one path on three vertices). However, asymmetric competitive relationships among buyers generate higher revenues than symmetric ones. The optimal asymmetric networks are characterized by (i) every buyer having at least one rival, and (ii) the existence of a buyer not considered a rival by anyone.