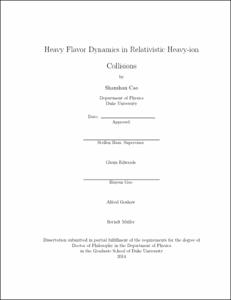 Heavy flavor hadrons serve as valuable probes of the transport properties of the quark-gluon plasma (QGP) created in relativistic heavy-ion collisions. In this dissertation, we introduce a comprehensive framework that describes the full-time evolution of heavy flavor in heavy-ion collisions, including its initial production, in-medium evolution inside the QGP matter, hadronization process from heavy quarks to their respective mesonic bound states and the subsequent interactions between heavy mesons and the hadron gas.

The in-medium energy loss of heavy quarks is studied within the framework of a Langevin equation coupled to hydrodynamic models that simulate the space-time evolution of the hot and dense QGP matter. We improve the classical Langevin approach such that, apart from quasi-elastic scatterings between heavy quarks and the medium background, radiative energy loss is incorporated as well by treating gluon radiation as a recoil force term. The subsequent hadronization of emitted heavy quarks is simulated via a hybrid fragmentation plus recombination model. The propagation of produced heavy mesons in the hadronic phase is described using the ultra-relativistic quantum molecular dynamics (UrQMD) model. Our calculation shows that while collisional energy loss dominates the heavy quark motion inside the QGP in the low transverse momentum (pT) regime, contributions from gluon radiation are found to be significant at high pT. The recombination mechanism is important for the heavy flavor meson production at intermediate energies. The hadronic final state interactions further enhance the suppression and the collective flow of heavy mesons we observe. Within our newly developed framework, we present numerical results for the nuclear modification and the elliptic flow of D mesons, which are consistent with measurements at both the CERN Large Hadron Collider (LHC) and the BNL Relativistic Heavy-Ion Collider (RHIC); predictions for B mesons are also provided.

In addition, various transport properties of heavy quarks are investigated within our numerical framework, such as the thermalization process of heavy quarks inside the QGP, and how the initial configuration of the QGP as well as its properties affect the final state spectra and the elliptic flow of heavy mesons and their decay electrons. The effects of initial state fluctuations in heavy-ion collisions are also studied and found to enhance the heavy quark energy loss in a (2+1)-dimensional boost invariant scenario. Furthermore, a new set of observables -- heavy-flavor-tagged angular correlation functions -- are explored and found to be potential candidates for distinguishing different energy loss mechanisms of heavy quarks inside the QGP.