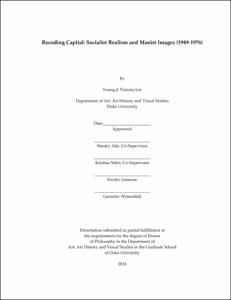 This dissertation examines the visual production of capital in socialist realist images during the Maoist era (1949-1976). By deconstructing the pseudo-opposition between capitalism and socialism, my research demonstrates that, although the country was subject to the unchallenged rules of capital and its accumulation in both domestic and international spheres, Maoist visual culture was intended to veil China's state capitalism and construct its socialist persona. This historical analysis illustrates the ways in which the Maoist regime recoded and resolved the versatile contradictions of capital in an imaginary socialist utopia. Under these conditions, a wide spectrum of Maoist images played a key role in shaping the public perception of socialism as a reality in everyday lives. Here the aesthetic protocols of socialist realism functioned to create for the imagined socialist world a new currency that converted economic values, which followed the universal laws of capital, into the fetish of socialism. Such a collective "cognitive mapping" in Fredric Jameson's words - which situated people in the non-capitalist, socialist world and inserted them into the flow of socialist time - rendered imperceptible a mutated capitalism on the terrain of the People's Republic of China under Mao. This research aims to build a conversation between the real, material space subordinated to the laws of capital and the visual production of imaginary capital in the landscapes of socialist realism, for the purpose of mapping out how uneven geographical development contributed to activating, dispersing, and intensifying the global movement of Soviet and Chinese capital in the cultural form of socialist realism. This study also illustrates how, via the image-making process, socialist realist and Maoist images influenced by Mao's romantic vision of the countryside were meant to neutralize this uneven development in China and mask its on-going internal colonialism. Through this analysis, I argue that, in the interesting juncture where art for art's sake and art for politics intersected, Maoist visual culture ended up reproducing the hegemony of capital as a means of creating national wealth.