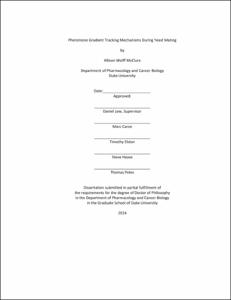 Many cell types are remarkably adept at tracking chemical gradients, but they use different mechanisms in order to properly migrate or grow up-gradient. Bacteria use a temporal sensing mechanism to determine if they are swimming up-gradient. In contrast, eukaryotes are thought to use spatial sensing mechanisms where they compare the chemical concentration on one side of the cell to the other. In the present study, we utilized budding yeast <italic>(Saccharomyces cerevisiae) </italic>mating as a model for gradient tracking. Yeast cells are thought to use a spatial gradient tracking mechanism to grow up the pheromone gradient created by their mating partners. However, yeast cells polarize their receptors towards the direction of growth thereby reducing the distance that they can use to compare pheromone concentrations.