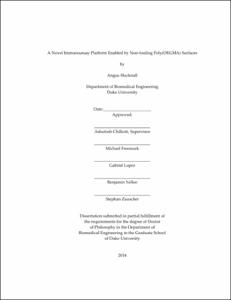 The primary barriers to multiplexed point of care immunoassays are: (1) cost; (2) response time; and (3) sample handling. Described here is a self-contained, multiplexed immunoassay platform for point of care detection that leverages a number of enabling technologies to address these barriers. This platform is referred to as the "D4" assay, as it is composed of the following four sequential, concerted events (Figure 1): (1) Dispense (droplet of blood); (2) Dissolve (printed reagents on chip); (3) Diffuse across surface; (4) Detect binding event.

The D4 assay process begins when a finger-stick is administered and the resulting droplet of blood is applied to the surface of a detector chip. Hydrophobic ink printed onto the surface of the chip confines the blood droplet to a non-fouling region containing soluble, labile spots of detection antibodies and insoluble, non-labile spots of capture antibodies. As the soluble detection antibodies are dissolved from their printed spots by the droplet of blood, three serial events occur to generate signal (Figure 2): (1) the first half of the detection complex is formed by the binding of analytes present in blood to the stable capture agent spots; (2) diffusion of the blood laterally through the polymer brush, resulting in the dissolution and diffusion of soluble detection antibody spots; (3) solubilized detection antibodies bind to their respective analyte-capture agent spots, completing the detection complex and resulting in signal generation at the position of the non-labile capture antibody spots.

This assay relies upon the ability of labeled detection antibodies, printed into a nonfouling brush as "labile spots", to be carried by blood flow to adjacent rows of stably immobilized capture antibodies by diffusion of the analyte solution (Figure 2). Generation of signal at a given capture spot location provides identification of individual analytes (positives). Quantification of the concentration of the different analytes is carried out identically to a conventional fluorescence immunoassay by pre-calibration of the system using a dilution series of the analyte spiked into whole blood.

The D4 assay addresses several critical needs in point of care testing as follows: First, the cost of testing is reduced through miniaturization, multiplexing and one-step, on-site processing of undiluted whole blood obtained from a finger stick. Second, in order to simplify the immunoassay process, the D4 relies on diffusion to bring spatially localized reagents together to create a functional assay and thereby eliminate the need for liquid transfer steps, microfluidic manipulation of sample or reagents, and wash steps. Third, this multiplexed platform is capable of screening for a panel of markers in a single drop of blood with no sample preprocessing. Fourth, the assay is fast, which alleviates the difficulties often associated with communicating the outcome of diagnostic tests. A prototype of the D4 assay is shown in Figure 3 below.