Occupational Stratification and the Multidimensional Structure of Symbolic Meaning 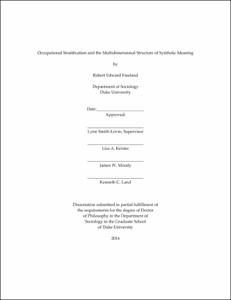 Subjective cultural meanings were once central to occupational stratification research. However, attempts to operationalize cultural meanings associated with occupations have been widely criticized, leading contemporary stratification scholars to largely abandon subjective measures in favor of objective characteristics. This leaves a gap in our understanding of how inequality is generated and maintained because Weber ([1958]) theorized that status, a form of social symbolic power based on cultural beliefs, represents one of the fundamental bases of inequality. Without an adequate method of operationalizing occupational symbolic meanings, the extent to which cultural beliefs influence stratified life outcomes remains largely unknown.

To address this, I used affect control theory, a quantitative general theory of

social action, and its measurement model, the semantic differential scale, to examine three issues regarding the relationship between cultural beliefs and stratified outcomes. Symbolic meaning was quantified into EPA ratings that measure three universal, affective dimensions: evaluation (good versus bad), potency (powerful versus weak), and activity (lively versus quiescent). Despite extensive support within structural social psychology, this approach has not been widely used in the field of stratification. In addition to providing a quantitative framework, because symbolic meanings are comprised of multiple dimensions, affect control theory's multidimensional construction allows for novel approaches not possible using unidimensional measures. The three chapters that follow use affect control theory and ratings of occupational meanings from a newly collected dictionary of affective meaning to address the occupational gender wage gap, the effect of occupational status on life chance outcomes, and the development and testing of a new measure of occupational status.