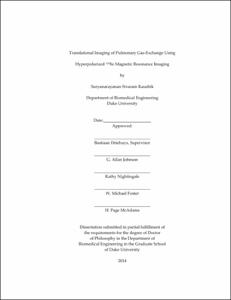 The diagnosis and treatment of pulmonary diseases still rely on pulmonary function tests that offer archaic or insensitive biomarkers of lung structure and function. As a consequence, chronic obstructive pulmonary disease is the third leading cause of death in the US, and the hospitalization costs for asthma are on the order of $29 Billion. Pulmonary diseases have created a large and unsustainable economic burden, and hence there is still a dire need for biomarkers that can predict early changes in lung function. The work presented in this thesis looks to address this very issue, by taking advantage of the unique properties of hyperpolarized (HP) <super>129</super>Xe in conjunction with magnetic resonance imaging (MRI), to probe the fundamental function of the lung - gas-exchange.

While a bulk of the inhaled HP <super>129</super>Xe stays in the alveolar spaces, its moderate solubility in the pulmonary tissues causes a small fraction of this xenon in the alveolar spaces to diffuse into the pulmonary barrier tissue and plasma, and further into the red blood cells (RBC). Additionally, when in either of these compartments, xenon experiences a unique shift in its resonance frequency from the gas-phase (barrier - 198 ppm, RBC - 217 ppm). These unique resonances are collectively called the dissolved-phase of xenon. As the pathway taken by xenon to reach the RBCs is identical to that of oxygen, this dissolved-phase offers a non-invasive probe to study the oxygen transfer pathway, and imaging its distribution, to first order, would give us an image of gas-exchange in the lung.

Gas-exchange is controlled by ventilation, perfusion, and lastly diffusion of gases across the capillary membrane. This process of diffusion is dictated by Fick's first law of diffusion, and hence the volume of gas taken up by the capillary blood stream depends on the alveolar surface area, and the interstitial thickness. Interestingly, changes in these factors can be measured using the resonances of xenon. Changes in the alveolar surface area brought on by diseases like emphysema will increase the diffusion of xenon within the alveolus. Thus, by using diffusion-weighted imaging of the gas-phase of <super>129</super>Xe, which is the focus of chapter 3, one can extract the `apparent diffusion coefficient' (ADC) of xenon, that is sensitive to the changes in the alveolar surface area. The dissolved-phase on the other hand, while sensitive to the surface area, is also sensitive to subtle changes in the interstitial thickness. In fact, after the application of an RF pulse on the dissolved-phase, the recovery time for the xenon signal in the RBCs is significantly delayed by micron scale thickening of the interstitium. This delayed signal recovery can be used as a sensitive marker for diffusion impairment in the lung.