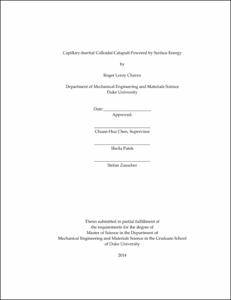 When two liquid drops coalesce on a colloidal particle, the particle and merged drop may jump away from the surface in which it is located. This jumping mechanism has been viewed in many fungal spores. The powering mechanism of the jumping motion is the conversion of surface energy to kinetic energy upon coalescence, which, in this case, does not require a superhydrophobic surface. Although the jumping process of fungal ballistospores have been studied, a detailed study of the mechanism of the jumping process has not been explored, which has implications in areas such as weather cycles, crop diseases, and self-cleaning surfaces. In this thesis, we analyze two different colloidal catapult systems with different geometries and develop a capillary-inertial scaling law that closely matches the jumping behavior of the systems. The first system is a spherical particle with two similar-sized droplets on top. The second system closely mimics a ballistospore.

To experimentally verify the scaling hypothesis, an inkjet printer was used to print liquid droplets on the two geometries. Once the two drops coalesced in each case, the initial velocity of the projectile was measured. When measuring the velocity of each system in comparison to the relative size of droplets, the ballistospore-like jumping catapult experiment is more efficient in removing the particle, and closely matches the results of ballistospore data. This is confirmed by an interfacial numerical simulation.