Embodied Attention: Learning from the Wisdom of the Desert and Saint Augustine in an Age of Distraction 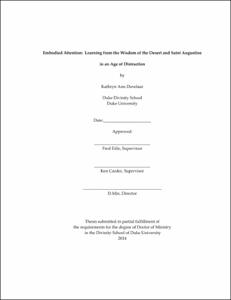 Throughout the life of the Church, certain habits have been cultivated to shape the identity of its community and deepen our communion with God. We see in the writings of the Desert Fathers that attentiveness is one habit that people of faith have taken care to cultivate to better connect with God. Contemporary of the Desert Fathers, Saint Augustine, also speaks to attentiveness and its relation to time. What both the Desert writers and Augustine understand is that our ability to connect with God depends on our ability to be attentive in the present moment.

This thesis will argue that an embodied, present attentiveness is foundational to a relationship with God; furthermore, given the patterns of attention developed around Wireless Mobile Devices (i.e. smartphones) and the strong pull on its users for their constant interaction, I argue that the practices created around these devices do in fact hinder one's ability to connect with God, despite their other potential for good. The thesis employs qualitative research in the form of literature reviews. First, drawing from the practices of the Desert Fathers and Augustine's understanding of the relationship between time, memory, and knowledge of God, I make a case for the discipline of embodied attentiveness to the present moment as foundational to our relationship with God. I then draw from current psychological, sociological and anthropological insights to model how the current technological landscape places particular pressures on an embodied present attentiveness, with specific focus on the Wireless Mobile Device (WMD), commonly known as the smartphone. Finally, I place in conversation the findings from these reviews; leading to an assessment on the patterns technology creates around attentiveness.

People are becoming increasingly aware and concerned that the Internet and Wireless Mobile Devices are not neutral mediums and consistent exposure (and use) of these mediums is affecting us. We will see in this thesis that not only are habits of communication shifting, but also we are literally being rewired as our neural pathways are firing into uncharted territory. While psychological, sociological, and philosophical assessments of communication technologies and the self are critical to understand various implications on attentiveness, the goal of this thesis is to articulate the practices that the use of Wireless Mobile Devices cultivates regarding attentiveness through a theological lens.

As we begin to understand the concerns of the Saints who have gone before us, combined with understanding the shifting landscape of technology as it pertains to attentiveness, we can imagine why it is that the Church ought to be concerned with the continued cultivation of the discipline of attentiveness. Rather than simply "sounding the alarm" that technology is detrimental to our spiritual formation, however, this thesis will attempt to help the Church have a more nuanced understanding of why social media inhibits our ability to be attentive, as it examines to what end (<italic>telos</italic>) our attention is being drawn. After developing a more robust understanding of why a present, embodied attentiveness is foundational to our relationship with God, we will be able to enter into conversations regarding social media that are nuanced beyond it having "positive" and "negative" effects.