“Black Power Does Not Come Out of the Sky”: The Emergence of Black Power Politics in the Northern Student Movement, 1961-1968 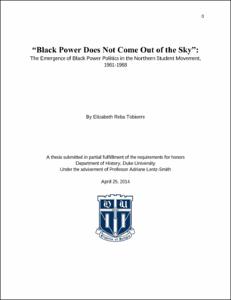 Young, idealistic, and ready to test the waters of American democracy, the Northern Student Movement represented a segment of the New Left that sought a more active involvement in the nation’s affairs while attempting to reform the Old Left, or the old “liberal tradition” that focused on ideology. Inspired by the anti-war movement and the black freedom struggle, northern college students found ways to get involved in the civil rights movement. During the 1960s sit-ins, many found their way “down South.” Peter Countryman, a Yale student, was one of those profoundly impacted by black leaders in the South. Deciding to become active, Countryman and a group of students spearheaded the Northern Student Movement. From their founding conference in 1962, the NSM would lead a remarkable effort in the North to remedy deeply rooted racial injustices, while reforming their approach to local political struggle in hopes of building an independent black North that was free.

Black Power Does Not Come Out of the Sky tells the story of the interracial community organizing tradition and its evolution during the 1960s through the lens of the Northern Student Movement. It tells the story of how young college students across northern cities worked with local, black community people to deal with unresponsive institutional structures. At the same time, Black Power Does Not Come Out of the Sky narrates the progression of young, ideological activists as they moved to the more “radical mystique” that evolved by 1964 to confront the frustrations of white liberalism and American democracy. The center of the story reveals how black and white organizers faced internal conflict and tensions over organizing strategy. Most importantly, this thesis establishes that the Northern Student Movement, a forgotten voice of the northern black freedom struggle, significantly influenced the emergence of black power politics in the North.

Along with furthering the paradigm of the long civil rights movement, the thesis deconstructs the "King" narrative of the civil rights movement and instead contributes to a field of growing literature on the organic local organizing tradition. Finally, the research presented complicates the current narrative of the origins of the black power movement by exploring the politics of black nationalism and racial separatism before 1966 as an organizing instrument to achieve independent political organization.