Prospects of Carbon Dioxide Emissions at a Power Company in Korea 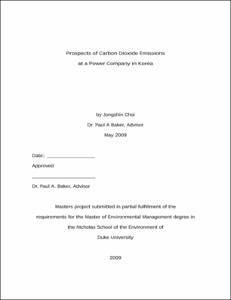 Files
energy modeling master project publish_Choi Jongshin_.pdf
3.5 Mb
Separate Abstract_Choi jongshin.pdf
15.1 Kb
Date
Author
Choi, Jongshin
Advisor
Baker, Paul
Repository Usage Stats
849
views
1,358
downloads
Abstract
Issues on green house gas emissions and climate change are principle global concerns which should be addressed urgently. Among the emitters, power generation sector is the most critical point source of CO2. In fact, many current countermeasures of climate change are focused on the power generation sector, which may imply that the successful action in this area would contribute to the mitigation of climate change substantially. At the same time, it would be consequential to recognize the diverse situations of each nation’s power industry to approach this global task with more collaboration. At this point, it seems to be practical to examine the CO2 emissions trends for a certain existing power company in Korea, a developing country, while an OECD member. For my research, I have selected the Korea East-West Power co. Ltd (EWP), one of the five major thermal power companies in Korea and analyzed during a time period between 2007 and 2030. According to the results, CO2 is projected to increase 60% during this time period with Business as Usual (BAU) scenario. Even with the renewable energy scenario, the CO2 increase is 32%, which might imply that CO2 reduction for this company would be very complicated task in the near future mainly because of the expected economic growth, high efficiency of existing plants and lack of low carbon power source. Currently, innovative technologies from the industry and energy conservation efforts from the public should be combined together. In terms of technology, renewable energy and Carbon Capture and Storage (CCS) should be on the priority. As for costs, coal-fired power and nuclear power plants have turned out to be more competitive. While, renewable energy has been proved to be an expensive choice, this power source is expected to gain competitiveness as extensive researches and supports are invested in this field.
Type
Master's project
Department
Nicholas School of the Environment and Earth Sciences
Subject
Carbon Dioxide
Power Industry
Permalink
https://hdl.handle.net/10161/950
Citation
Choi, Jongshin (2009). Prospects of Carbon Dioxide Emissions at a Power Company in Korea. Master's project, Duke University. Retrieved from https://hdl.handle.net/10161/950.
Collections
More Info
Show full item record