Use by the U.S. Nuclear Regulatory Commission of the Obviously Superior Criterion for Alternative Sites 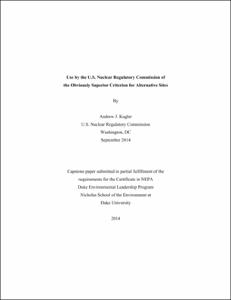 View / Download
172.7 Kb
Date
Author
Kugler, Andrew J.
Repository Usage Stats
312
views
314
downloads
Abstract
In its consideration of alternative sites for new nuclear power plants, the U.S. Nuclear Regulatory Commission (NRC) uses a standard that the applicant’s proposed site will not be rejected in favor of an alternative site unless the NRC staff determines that the alternative site is “obviously superior” to the proposed site1. In this paper I will summarize the historical development of this standard and how this standard has fared in the courts. I will then examine the extent to which this standard complies with the requirements of National Environmental Policy Act (NEPA) of 1969, as amended2 and the associated regulations published by the Council on Environmental Quality3. I will also examine how the standard compares to the approaches used by other agencies, such as the U.S. Army Corps of Engineers (which uses a standard of the least environmentally damaging practicable alternative). In conclusion, I will discuss whether the NRC should consider modifying the standard either because of challenges to its past implementation, or foreseeable changes in future implementation.
Type
Report
Permalink
https://hdl.handle.net/10161/9559
Citation
Kugler, Andrew J. (2015). Use by the U.S. Nuclear Regulatory Commission of the Obviously Superior Criterion for Alternative Sites. Retrieved from https://hdl.handle.net/10161/9559.
Collections
More Info
Show full item record