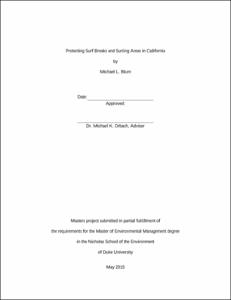 View / Download
2.3 Mb
Date
Author
Blum, Michael
Advisor
Orbach, Michael K.
Repository Usage Stats
427
views
597
downloads
Abstract
In California, surfing is part of a 24 billion dollar coastal economy, a form of water-based recreation recognized in state coastal policy, and is positively identified with the state’s broad history and culture. Where surfing occurs there exist recreational opportunities, history and culture, and economic impact. Yet, surfing’s value is often not recognized or is ignored in coastal management and development decisions. Consequently, the surfing experience may be diminished by a variety of threats. These threats may have broad impacts on coastal environments, uses and user groups, but they are particularly acute for surfing, which depends on surf breaks both as a site-specific biophysical amenity and a cultural focusing point. When fully developed, these threats have resulted in the permanent loss of surf breaks. In this project, case studies formed through key informant interviews and a review of relevant literature compared international cases of surf break protection to recent efforts in California. Protecting surf breaks in other countries has been initiated either as a reaction to an imminent threat or through a proactive interest in recognizing a surfing resource’s value, and has required new collaborations between private sector project proponents and management authorities. In California, where efforts have recognized and even honored surf breaks more than protected them, such collaborations have yet to form. Emergent themes from the case studies informed three conservation paths, or tracks, for surf break protection: recreational; cultural or historical; and natural heritage. Federal and state statutory frameworks, in particular the California Marine Managed Areas Improvement Act (2000), California Coastal Act (1976), and National Historic Preservation Act (1966), match these tracks and can be applied proactively, and likely in combination, to protect spatially-explicit, site-specific areas such as surf breaks. However, to date in California and, more generally in the United States, protected marine areas have overwhelmingly been established to protect imperiled species and habitat. Developing program-level capacity to recognize and protect other sources of coastal resource value – such as cultural, historical, and recreational value – provides communities an opportunity to more fully express their interests in the coastal and ocean public trust context.
Type
Master's project
Department
Nicholas School of the Environment and Earth Sciences
Subject
California
case study
coastal management and development
protection
surf break
surfing
Permalink
https://hdl.handle.net/10161/9592
Citation
Blum, Michael (2015). Protecting Surf Breaks and Surfing Areas in California. Master's project, Duke University. Retrieved from https://hdl.handle.net/10161/9592.
Collections
More Info
Show full item record