Market Analysis of Israeli CSP Technologies in the Chinese Market 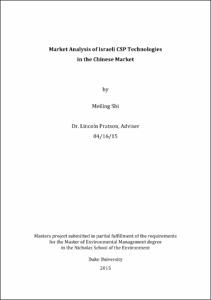 View / Download
3.3 Mb
Date
Author
Shi, Meiling
Advisor
Pratson, Lincoln
Repository Usage Stats
249
views
953
downloads
Abstract
Israel is one of the leading countries in CSP technology development. A few startups have been working to bring different CSP technologies into the power generation market. However these companies have encountered various barriers in deploying CSP projects in their homeland despite the abundant sunlight and know-how Israel has. Acquiring land permit could take years while time is what a capital-intensive technology startup cannot afford. Monopoly in the power market and lack of incentives has taken a toll on the renewables sector in Israel. Meanwhile, China has been progressing to establish its own CSP power market. Supporting policies are on their way while a few projects are already under construction. CSP power plants with storage capacity can produce utility-quality electricity, which has much less disturbance to the grid compared to PVs and wind energy. Yet the development of CSP technologies in China is limited. Introducing Israeli CSP technologies into the Chinese market could be one of the solutions that can benefit both sides. The market analysis focuses on three companies: HelioFocus, AORA-Solar and BrightSource. Based on the study of their technologies and the particular case of the Chinese CSP market, models are developed to explore their market potentials. HelioFocus could foresee an encouraging share in the CSP market through replacing part of the installed capacity from the existing coal-fired power plants. Its thermal boosting system is ideal in high-DNI provinces such as Inner Mongolia, Gansu and Qinghai. AORA-Solar’s hybrid system focuses on off-grid community-based power generation. However, industrial implementation would be a more viable approach. BrightSource has the portfolio both the Chinese government and local investors desire; in that they build large-scale systems and they already have power plants operational. All of these will help accelerate their development in China.
Type
Master's project
Department
Nicholas School of the Environment and Earth Sciences
Subject
CSP Israel China coal-fired market analysis
Permalink
https://hdl.handle.net/10161/9602
Citation
Shi, Meiling (2015). Market Analysis of Israeli CSP Technologies in the Chinese Market. Master's project, Duke University. Retrieved from https://hdl.handle.net/10161/9602.
Collections
More Info
Show full item record