Opening the X-Files: A Case for Rejoining the Bureau International des Expositions (BIE) 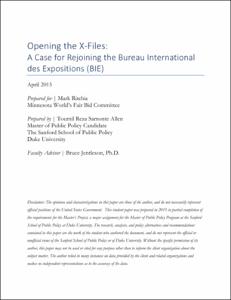 View / Download
1.9 Mb
Date
Author
Samonte, Toumil Reza Samonte
Advisor
Jentleson, Bruce W
Repository Usage Stats
429
views
1,503
downloads
Abstract
Although world expositions—or world’s fairs—continue to captivate millions of tourists abroad, many Americans do not realize that these events still take place today. The United States continues to participate in world’s fairs by coordinating national pavilions; however, the last domestically-hosted world’s fair occurred in New Orleans, Louisiana in 1984. For more than 30 years, the U.S. was a member of the Bureau International des Expositions (BIE), a treaty organization that regulates and schedules world expositions. The U.S. withdrew from the BIE in 2001, raising a significant barrier for U.S. cities that wish to host a world’s fair of their own. The Minnesota World’s Fair Bid Committee (MN-2023) is preparing a bid to host a three-month-long world’s fair in 2023. The fair is expected to attract 12 million visitors, to generate $4 billion in tourism spending, and to spur further development of the light-rail system in the Twin Cities. World’s fair hosts are selected through a bidding and voting process in the BIE’s General Assembly. As a non-member state of the BIE, a U.S. city’s bid to host a world’s fair must win 67 percent of the General Assembly vote, and the bidding city must pay higher registration fees than cities from member states. U.S. membership in the BIE would reduce the voting threshold to 50 percent and cut host cities’ registration fees in half. The U.S. would then be expected to pay around $33,000 in annual dues to the BIE. To support MN-2023’s bid, this report examines how and why the U.S. withdrew from the BIE and its impact on hosting future expos in the US. This report also proposes a political strategy for rejoining the BIE. Throughout the twentieth century, the U.S. frequently hosted world’s fairs, with varying degrees of financial success. Many of these fairs influenced the trajectory of host cities’ urban development, leaving physical landmarks and developing new sites for commercialization. However, the bankruptcy and mismanagement of the 1984 Louisiana World Exposition cast a long shadow over prospective world’s fairs in the U.S. This failure, as well as anti-internationalist sentiments and a focus on fiscal restraint throughout the 1990s, led Congress to slash funding for U.S. pavilions at expositions. When the culturally-oriented United States Information Agency merged with the State Department, expo participation became but a small cog in the State Department’s wide-ranging responsibilities. Congress stopped appropriating funding for BIE membership in 1998, prompting the State Department to recommend withdrawal from the organization in 2001. A review of State Department regulations and interviews with former government officials indicate that Congress must first demonstrate support for rejoining the BIE, before State Department officials will recommend rejoining the BIE to the Secretary of State. However, interviews with world’s fair organizers, BIE officials and government officials also identified congressional apathy as an obstacle to promoting this issue. Given the negative impacts of non-member state status on MN-2023’s bid, MN-2023 should work to overcome congressional apathy and pursue their support in rejoining the BIE. The following proposal provides a political strategy for how to rejoin the BIE. MN-2023 and its partners should mobilize public, private and congressional support to pass a “sense of the Senate” resolution supporting BIE membership. MN-2023 should then work the Departments of State and Commerce, and the White House to transform congressional support into a statement of federal commitment by submitting an “Instrument of Accession” to the BIE.
Type
Master's project
Department
The Sanford School of Public Policy
Subject
Minnesota, world's fairs, in-depth interviews, qualitative methods, State Department, Congress,
Permalink
https://hdl.handle.net/10161/9708
Citation
Samonte, Toumil Reza Samonte (2015). Opening the X-Files: A Case for Rejoining the Bureau International des Expositions (BIE). Master's project, Duke University. Retrieved from https://hdl.handle.net/10161/9708.
Collections
More Info
Show full item record