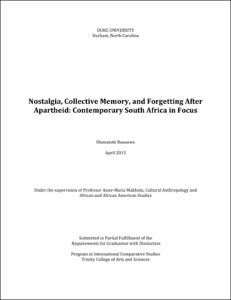 View / Download
10.3 Mb
Date
Author
Runsewe, Oluwatobi
Repository Usage Stats
741
views
2,219
downloads
Abstract
In 1994, the apartheid regime fell and South Africa held its first democratic elections. The country quickly came to be characterized in the terms of democracy, truth, reconciliation, freedom, human rights, and racial harmony. Pre-eminent amongst such lofty concepts, both locally and globally, claims to racial reconciliation and equality lent weight to the notion of South Africa as a “Rainbow Nation.” This thesis ventures beneath these grand narratives of post-colonial triumph and explores the complexities, contradictions and shifts within the discursive framing of a harmonious, post-apartheid South Africa. In particular, the thesis is concerned with how “Born Frees,” young South Africans born just before or after the political transition who became eligible to vote for the first time in 2014, have caused a shift in the dominant post-apartheid discourse. The thesis analyzes their status as political subjects and the socioeconomic realities they face in order to understand their political incentives and motivations. Ultimately, the thesis argues that, in response to the socioeconomic inequalities that have become too glaring to ignore, and a shifting, younger electorate both aware of these inequalities and disengaged from history, South Africa is moving away from the triumphalist discourse that dominated the early post-1994 era and towards notions that challenge the illusion of post-apartheid racial and class equality. The thesis focuses on a number of key sites including national school curricula, political advertising, and public memory to show that political discourse is also shifting from history-based or race-based campaigning to issue-based campaigning focused on economic inequality.
Description
honors thesis; awarded high honors
Type
Honors thesis
Department
International Comparative Studies
Subject
South Africa, political discourse, school curricula, "Born Frees," rainbow nation, truth and reconciliation
Permalink
https://hdl.handle.net/10161/9728
Citation
Runsewe, Oluwatobi (2015). Nostalgia, Collective Memory, and Forgetting after Apartheid: Contemporary South Africa in Focus. Honors thesis, Duke University. Retrieved from https://hdl.handle.net/10161/9728.
Collections
More Info
Show full item record