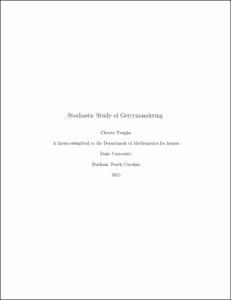 View / Download
528.7 Kb
Date
Author
Vaughn, Christy
Repository Usage Stats
302
views
250
downloads
Abstract
In the 2012 election for the US House of Representatives, only four of North Carolina’s thirteen congressional districts elected a democrat, despite a majority democratic vote. This raises the question of whether gerrymandering, the process of drawing districts to favor a political party, was employed. This study explores election outcomes under different choices of district boundaries. We represent North Carolina as a graph of voting tabulation districts. A districting is a division of this graph into thirteen connected subgraphs. We define a probability distribution on districtings that favors more compact districts with close to an equal population in each district. To sample from this distribution, we employ the Metropolis-Hastings variant of Markov Chain Monte Carlo. After sampling, election data from the 2012 US House of Representatives election is used to determine how many representatives would have been elected for each party under the different districtings. Of our randomly drawn districts, we find an average of 6.8 democratic representatives elected. Furthermore, none of the districtings elect as few as four democratic representatives, as was the case in the 2012 election.
Type
Honors thesis
Department
Mathematics
Subject
gerrymandering
Markov Chain Monte Carlo
Metropolis-Hastings
election
stochastic
redistricting
Permalink
https://hdl.handle.net/10161/9740
Citation
Vaughn, Christy (2015). Stochastic Study of Gerrymandering. Honors thesis, Duke University. Retrieved from https://hdl.handle.net/10161/9740.
Collections
More Info
Show full item record