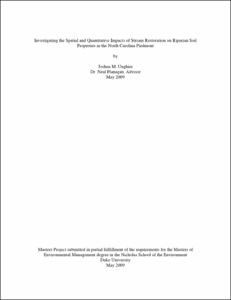 View / Download
1.3 Mb
Date
Author
Unghire, Joshua
Advisor
Flanagan, Neal
Repository Usage Stats
288
views
434
downloads
Abstract
One of the prime objectives of restoration is to alter the biotic and abiotic components of a system in a way so as to promote the revitalization of ecosystem functions and characteristics similar to those of undisturbed ecosystems of the same type. In stream restoration, this involves reestablishing a hydrologic regime favorable to the colonization of hydrophytic vegetation and the development of hydric soils. Soil properties of riparian floodplains are largely influenced by connectivity with the stream channel, but can also be affected by the physical process of restoration itself. The objective of this study was to quantify the spatial impacts of restoration efforts on soil properties by comparing soils collected before and four years after a riparian restoration in the piedmont of North Carolina. Few studies have assessed spatial variability both before and after restoration. We used a spatially discrete sampling design which allowed for the assessment of the spatial variability of soil properties: soil organic matter content (SOM), extractable inorganic nitrogen (NO2-NO3) and extractable inorganic phosphorus (Pex). The spatial patterns were modeled with semi-variance analysis and kriging. We also used statistical analysis to compare the changes in abundance of soil properties. The mean SOM significantly decreased after restoration, whereas the mean Pex significantly increased. Concentrations of NO2-NO3 were not significantly different in the post-restoration sampling compared to pre-restoration levels. Our results indicate that restoration processes have resulted in the spatial homogenization of SOM and Pex, removing intrinsic soil patchiness. The loss of this spatial patterning along with soil organic matter pools represent a negative impact of restoration on important ecosystem characteristics which may have taken extensive lengths of time to develop. Further research over longer time scales will be needed to assess whether these losses represent a short-term setback in the development of the ecosystem, or a long-term alteration of the ecosystems characteristics. While disturbance from restoration processes may be unavoidable to some extent, the potential negative impact of these activities is important to understand as to avoid excessive disturbance.
Type
Master's project
Department
Nicholas School of the Environment and Earth Sciences
Subject
Riparian
Wetlands
Geostatistics
Semivariance Analysis
Kriging
Restoration
Permalink
https://hdl.handle.net/10161/976
Citation
Unghire, Joshua (2009). Investigating the Spatial and Quantitative Impacts of Stream Restoration on Riparian Soil Properties in the North Carolina Piedmont. Master's project, Duke University. Retrieved from https://hdl.handle.net/10161/976.
Collections
More Info
Show full item record