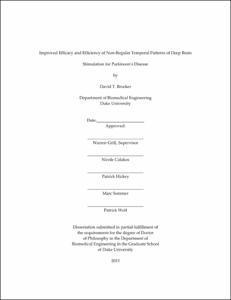 Deep brain stimulation (DBS) is an effective therapy for motor symptoms in Parkinson's disease (PD). DBS efficacy depends on the stimulation parameters, and the current gold standard therapy is high-frequency stimulation (>100 Hz) with constant interpulse intervals and short pulse widths (<210 &#956;s). However, the temporal pattern of stimulation is a novel parameter dimension that has not been thoroughly explored. We used non-regular temporal patterns of DBS to pursue two goals: to better understand the mechanisms of DBS, and to increase the efficacy and efficiency of DBS for PD.

First, we designed high frequency patterns of non-regular stimulation with distinct features proposed to be important for efficacy and evaluated these patterns in human subjects with PD. Unexpectedly, some non-regular patterns of stimulation improved performance of an alternating finger-tapping task-a proxy for bradykinesia-compared to high frequency regular stimulation. Performance in the motor task was correlated with suppression of beta band power in a computational model of the basal ganglia suggesting a possible mechanism for effective stimulation patterns.

Inspired by the increased clinical efficacy of non-regular patterns of stimulation with high average frequencies, we developed a non-regular pattern of stimulation that reduced motor symptoms in PD using a low average stimulation frequency. Since the number of potential combinations of interpulse intervals is exceedingly large and it is unclear how such timing should be selected, we applied computational evolution to design an optimal temporal pattern of deep brain stimulation to treat the symptoms of PD. Next, we demonstrated the efficacy of the resulting pattern of stimulation in hemi-parkinsonian rats and humans with PD. Both the optimized stimulation pattern and high frequency stimulation suppressed abnormal oscillatory activity in the basal ganglia in the rat and human, providing a shared mechanism of action for effective stimulation patterns. This innovation could allow patients to achieve battery life savings compared to traditional high frequency stimulation, which will reduce the costs and risks of frequent battery replacement procedures. Further, our approach can be used to design novel temporal patterns of stimulation in other applications of neural stimulation.

Finally, we explored evoked field potentials in the subthalamic nucleus (STN) in response to DBS. These potentials were evoked by stimulation through one of the contacts on the DBS lead and recorded from the two surrounding contacts. Subthalamic DBS local evoked potentials (DLEPs) have never before been recorded. We characterized the DLEPs, differences across DBS frequencies and time, their relationship to beta frequency oscillations and phase-amplitude coupling, and their dependence on electrode contact location.

A 3-dimensional biophysical model of DBS in the subthalamic nucleus-globus pallidus externus (GPe) subcircuit was built to explore the neural origin of the DLEPs. The computational model could reproduce the DLEP signal, and it revealed that the quasi-periodic DLEP oscillations are caused by excitatory synaptic currents in STN interrupted periodically by inhibition from GPe.

DLEP power was correlated with beta band oscillation power in the recordings without DBS, and significant phase-amplitude coupling was observed in a subset of subjects with robust DLEP responses. Together, all available evidence suggested the contact location was an important determinant for the presence and characteristics of DLEP signals. Predictions were made concerning contact location relative to the boundaries of the STN based on the DLEP recordings and insights gained using the computational model, and the predictions were in agreement with blinded post hoc imaging based contact localization for ~70% of contacts predicted to be within STN.