Development and Calibration of Reaction Models for Multilayered Nanocomposites 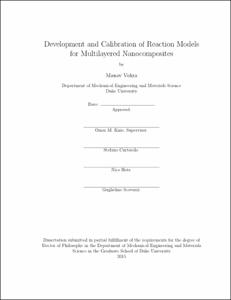 This dissertation focuses on the development and calibration of reaction models for multilayered nanocomposites. The nanocomposites comprise sputter deposited alternating layers of distinct metallic elements. Specifically, we focus on the equimolar Ni-Al and Zr-Al multilayered systems. Computational models are developed to capture the transient reaction phenomena as well as understand the dependence of reaction properties on the microstructure, composition and geometry of the multilayers. Together with the available experimental data, simulations are used to calibrate the models and enhance the accuracy of their predictions.

Recent modeling efforts for the Ni-Al system have investigated the nature of self-propagating reactions in the multilayers. Model fidelity was enhanced by incorporating melting effects due to aluminum [Besnoin et al. (2002)]. Salloum and Knio formulated a reduced model to mitigate computational costs associated with multi-dimensional reaction simulations [Salloum and Knio (2010a)]. However, exist- ing formulations relied on a single Arrhenius correlation for diffusivity, estimated for the self-propagating reactions, and cannot be used to quantify mixing rates at lower temperatures within reasonable accuracy [Fritz (2011)]. We thus develop a thermal model for a multilayer stack comprising a reactive Ni-Al bilayer (nanocalorimeter) and exploit temperature evolution measurements to calibrate the diffusion parameters associated with solid state mixing (720 K - 860 K) in the bilayer.

exhibit slow aerobic oxidation of zirconium (in the intermetallic), sustained for about 2-10 seconds after completion of the formation reaction. In a collaborative effort, we aim to exploit the sustained heat release for bio-agent defeat application. A simplified computational model is developed to capture the extended reaction regime characterized by oxidation of Zr-Al multilayers. Simulations provide insight into the growth phenomenon for the zirconia layer during the oxidation process. It is observed that the growth of zirconia is predominantly governed by surface-reaction. However, once the layer thickens, the growth is controlled by the diffusion of oxygen in zirconia.

A computational model is developed for formation reactions in Zr-Al multilayers. We estimate Arrhenius diffusivity correlations for a low temperature mixing regime characterized by homogeneous ignition in the multilayers, and a high temperature mixing regime characterized by self-propagating reactions in the multilayers. Experimental measurements for temperature and reaction velocity are used for this purpose. Diffusivity estimates for the two regimes are first inferred using regression analysis and full posterior distributions are then estimated for the diffusion parameters using Bayesian statistical approaches. A tight bound on posteriors is observed in the ignition regime whereas estimates for the self-propagating regime exhibit large levels of uncertainty. We further discuss a framework for optimal design of experiments to assess and optimize the utility of a set of experimental measurements for application to reaction models.