The Gatekeeper of TCR Signaling: LAT in T cell Homeostasis and Autoimmunity 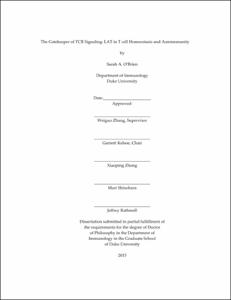 Linker for Activation of T cells, LAT, is a transmembrane adaptor protein that is vital for integrating TCR-mediated signals that modulate T cell development, activation, and proliferation. Upon engagement of the T cell receptor, LAT is phosphorylated and associates with Grb2, Gads, and PLC&#947;1 through its four distal tyrosine residues. Mutation of tyrosine 136 abolishes LAT binding to PLC&#947;1. This results in impaired TCR-mediated calcium mobilization and Erk activation. LATY136F knock-in mice have a severe but incomplete block in T cell development. Yet, CD4+ &#945;&#946; T cells undergo uncontrolled expansion in the periphery, resulting in a severe autoimmune syndrome characterized by Th2 skewing and resultant B cell autoreactivity. Here, we further studied the role of LAT-PLC&#947;1 signaling in T cell lineage commitment, cytokine production, and autoimmunity.

In addition to examining &#947;&#948; and &#945;&#946; T cell development, we also were interested in further exploring the role of LAT in cytokine production. While our previous data have demonstrated that T cells in LATY136F mice are Th2 skewed, producing large amounts of IL4, we investigated other cytokines that may be important for autoimmunity and found that these CD4+ &#945;&#946; T cells could also produce the proinflammatory cytokine IL6. Analysis of whole cell lysates from CD4+ &#945;&#946; LATY136F T cells demonstrated that NF&#954;B, AKT, and p38 were constitutively phosphorylated, and inhibition of these pathways resulted in reduced IL6 production. By crossing LATY136F mice with IL6 deficient mice, we demonstrated that early T cell survival was diminished in the absence of IL6. We further showed that this reduced CD4+ T cell pool was not due to further blocks in development, or an increase in FoxP3+ regulatory T cells. Finally, we demonstrated that over time, CD4+ T cells do hyperproliferate, yet B cell class switching and autoreactivity remains low. Our data uncovered a novel role for LAT-PLC&#947;1 signaling in regulating IL6 production by T cells during autoimmunity.

Finally, we wanted to further examine IL4 production and T helper cell differentiation in LATY136F mice. We examined IL4 production using KN2 reporter mice, where huCD2 marks T cells that have recently produced IL4 protein. We demonstrated that only a small proportion of the LATY136F T cells were actively secreting IL4. This subset of T cells were Tfh cells that expressed BCL6 and localized to B cell-rich germinal centers within the spleen. Most studies to date have examined Tfh cells in infection models, and have demonstrated that Tfh cells have very low expression of GATA3. Our results revealed in a spontaneous T cell-mediated autoimmune model system, that Tfh cells express both high levels of BCL6 and GATA3. Additionally, using an inducible deletion system, where normal development occurs, we showed that Tfh cells differentiation is the result of aberrant LAT signaling, rather than autoreactive TCRs with high affinity for self-peptide-MHC. LATY136F Tfh cells did require B cells for their development. Together, these results displayed a novel role for tonic LAT-PLC&#947;1 signaling in modulating Tfh cell differentiation and BCL6 expression.