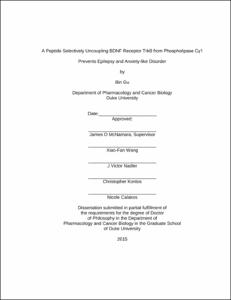 Temporal lobe epilepsy is a common and devastating disorder that features recurrent seizures and is often associated with pathologic anxiety and hippocampal sclerosis. An episode of prolonged seizures (status epilepticus) is thought to promote development of human temporal lobe epilepsy years later. A chemical-genetic approach established proof of concept that transiently inhibiting the receptor tyrosine kinase, TrkB, following status epilepticus prevented epilepsy, anxiety-like behavior and hippocampal damage in a mouse model, providing rationale for developing a therapeutic targeting TrkB signaling. To circumvent the undesirable consequence that global inhibition of TrkB exacerbates neuronal degeneration following status epilepticus, we sought to identify both the TrkB-activated signaling pathway mediating these pathologies and a compound that uncouples TrkB from the responsible signaling effector. To accomplish these goals, we used genetically modified mice and a model of seizures and epilepsy induced by a chemoconvulsant. Genetic inhibition of TrkB-mediated phospholipase C gamma 1 (PLC gamma 1) signaling suppressed seizures induced by a chemoconvulsant, leading to design of a peptide (pY816) that inhibited the interaction of TrkB with PLC gamma 1. We demonstrate that pY816 selectively inhibits TrkB-mediated activation of PLC gamma 1 both in vitro and in vivo. Treatment with pY816 prior to administration of a chemoconvulsant suppressed seizures in a dose- and time-dependent manner. Treatment with pY816 initiated after chemoconvulsant-evoked status epilepticus and continued for just three days suppressed seizure-induction of epilepsy, anxiety-like behavior and hippocampal damage assessed months later. This study elucidates the signaling pathway by which TrkB activation produces diverse neuronal activity-driven pathologies and demonstrates therapeutic benefits of an inhibitor of this pathway in an animal model in vivo. A strategy of uncoupling a receptor tyrosine kinase from a signaling effector may prove useful in diverse diseases in which excessive receptor tyrosine kinase signaling contributes.