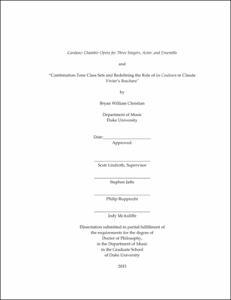 This dissertation consists of two parts: a chamber opera and an article on the work of Claude Vivier.

"Cardano" is a new chamber opera by composer Bryan Christian about the work and tragic life of the Renaissance polymath Gerolamo Cardano (1501-1576). Scored for three vocal soloists, an actor, and an eleven-part ensemble, "Cardano" represents a coalescence of Christian's interests in medieval and Renaissance sources, mathematics, and intensely dramatic vocal music. Christian constructed the libretto from fragmented excerpts of primary sources written by Cardano and his rival Niccolo Tartaglia. The opera reinvigorates Cardano's 16th-century scientific and philosophical models by sonifying and mapping these models to salient musical and dramatic features. These models prominently include Cardano's solution to the cubic equation and his horoscope of Jesus Christ, which was deemed so scandalous in the 16th century that it ultimately led to Cardano's imprisonment under the Roman Inquisition in 1570 - the opera's tragic conclusion. Presenting these ideas in opera allows them to resound beyond the music itself and project through the characters and drama on stage. In this way, the historical documents and theories - revealing Cardano's unique understanding of the world and his contributions to society - are given new life as they tell his tragic story.

Claude Vivier's homophonic treatment of combination tones--what he called les couleurs--demands an extension of traditional methods of harmonic and spectral analysis. Incomplete explanations of this technique throughout the secondary literature further demand a revised and cohesive definition. To analyze all variations of les couleurs, I developed the analytical concept of combination-tone classes (CTCs) and built upon Angela Lohri's (2010) combination tone matrix to create a dynamic CTC matrix, from which CTC sets may be extracted. Intensive CTC set analysis reveals a definitive correlation between CTC set and formal sections in Vivier's composition "Bouchara." Although formally adjacent CTC sets are often markedly varied, all sets share a subset of lower-order CTCs, aiding in perception of spectral cohesion across formal boundaries. This analysis illuminates the interrelationships of CTC sets to their parent dyads, their orchestration, their playing technique, and form in "Bouchara." CTC set analysis is compared with Vivier's sketches for "Bouchara," which suggest that les couleurs were intended as integral components of the work's musical structure.