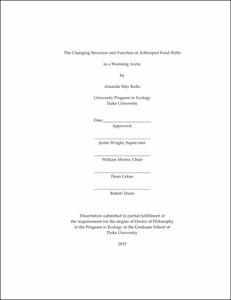 Environmental changes, such as climate change, can have differential effects on species, with important consequences for community structure and ultimately, for ecosystem functioning. In the Arctic, where ecosystems are experiencing warming at twice the rate as elsewhere, these effects are expected to be particularly strong. A proper characterization of the link between warming and biotic interactions in these particular communities is of global importance because the tundra's permafrost stores a vast amount of carbon that could be released through decomposition as greenhouse gases and alter the global rate of climate change. In this dissertation, I examine how arthropod communities are responding to warming in the Arctic and how these responses might be affecting ecosystem functioning.

I first address the question of whether and how long-term changes in climate are affecting individual groups and overall community structure in a high-arctic arthropod food web. I find that increasingly warm springs and summers between 1996-2011 differentially affected some arthropod groups and that this led to major changes in the relative abundances of different trophic groups within the arthropod community. Specifically, spring and summer warming are associated with relatively more herbivores and parasitoids and fewer detritivores within the community. These changes are particularly pronounced in heath sites, suggesting that arthropod communities in dry habitats are more responsive to climate change than those in wet habitats. I also show that herbivores and parasitoids are sensitive to conditions at subzero temperatures, even during periods of diapause, and that all trophic groups benefit from a longer transition period between summer and winter. These results suggest that the projected winter and springtime warming in Greenland may have unexpected consequences for northern arthropod communities. Moreover, the relative increase in herbivores and loss of detritivores may be changing the influence of the arthropod community over key ecosystem processes such as decomposition, nutrient cycling, and primary productivity in the tundra.

Predator-induced trophic cascades have been shown to impact both community structure and ecosystem processes, yet it is unclear how climate change may exacerbate or dampen predator effects on ecosystems. In the second chapter of my dissertation, I investigate the role of one of the dominant tundra predators within the arctic ecosystem, wolf spiders, and how their impact might be changing with warming. Using results from a two-year-long field experiment, I test the influence of wolf spider density over the structure of soil microarthropod communities and decomposition rates under both ambient and artificially warmed temperatures. I find that predator effects on soil microarthropods change in response to warming and that these changes translate into context-specific indirect effects of predators on decomposition. Specifically, while high densities of wolf spiders lead to faster decomposition rates at ambient temperatures, they are associated with slower decomposition rates in experimentally warmed plots. My results suggest that if warming causes an increase in arctic wolf spider densities, these spiders may buffer the rate at which the massive pool of stored carbon is lost from the tundra.

Wolf spiders in the Arctic are expected to become larger with warming, but it is unclear how this change in body size will affect spider populations or the role of wolf spiders within arctic food webs. In the third chapter of my dissertation, I explore wolf spider population structure and juvenile recruitment at three sites of the Alaskan Arctic that naturally differ in mean spider body size. I find that there are fewer juveniles in sites where female body sizes are larger and that this pattern is likely driven by a size-related increase in the rate of intraspecific cannibalism. These findings suggest that across the tundra landscape, there is substantial variation in the population structure and trophic position of wolf spiders, which is driven by differences in female spider body sizes.

Overall, this dissertation demonstrates that arctic arthropod communities are changing as a result of warming. In the long-term, warming is causing a shift in arthropod community structure that is likely altering the functional role of these animals within the ecosystem. However even in the short-term, warming can alter species interactions and community structure, with important consequences for ecosystem function. Arthropods are not typically considered to be major players in arctic ecosystems, but I provide evidence that this assumption should be questioned. Considering that they are the largest source of animal biomass across much of the tundra, it is likely that their activities have important consequences for regional and global carbon dynamics.