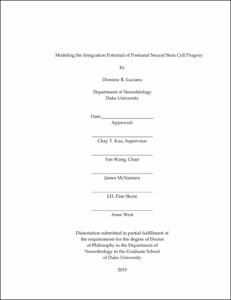 Postnatal subventricular zone (SVZ) neurogenesis in the rodent generates large numbers of neuroblasts that migrate and integrate daily into the mature olfactory bulb (OB) circuit. After brain injury and stroke, neural stem cells (NSCs) within the SVZ niche generate neuroblasts that migrate to the site of injury, thus providing a potential endogenous source of cells to replace those lost from injury. Given the paucity of treatment options after stroke, it is widely believed in the field that enhancing neurogenesis after injury has promise for providing future treatment. Despite the promise of endogenous NSCs for repair, in health the degree to which SVZ neuroblasts have the capability to integrate outside of their normal development in the olfactory bulb (OB) remains an open question. After brain injury, the progeny produced by NSCs after stroke remains poorly understood. My research has focused on identifying the NSC response to injury, and modeling SVZ neuroblasts' intrinsic integration capabilities.

Using nestin-CreERtm4 NSC lineage tracing we identified that NSCs produce a specialized Thbs4hi population of astrocytes. Photothrombotic cortical injuries result in Thbs4hi astrocyte generation, rather than neuroblast production in NSCs. In Thbs4KO/KO mice SVZ astrogenesis is ablated with neuroblasts instead migrating to the site of injury. With the observation of large numbers of neuroblasts at the injury site, we wanted to model the integration potential of SVZ derived neuroblasts without normal development. Using a novel live imaging assay, I found neuroblast maturational state is associated with distinct migratory properties and apical dendrite targeting ability. Microarray analyses of SVZ neuroblasts during migration show significant changes in gene expression profiles from birth to just prior to circuit integration in the OB. Furthermore, I present evidence that newborn SVZ interneurons require Ankyrin3 (Ank3) for precise action potential generation and survival in the OB. After photothrombotic cortical injuries, neuroblasts that migrate to the injury site are unable to upregulate Ank3.

These research presents a novel insight into the on the cellular identity of the NSC response to injury, and understanding how neuroblast development influences SVZ neuroblasts integration capabilities. New directions from this study include, additional study of Thbs4hi astrocytes' role after injury. Additionally, great progress can be made using the gene expression data to optimize neuroblast integration in health and after injury. Understanding the processes of NSC injury response and neuroblast integration will provide useful insight into nervous system function.