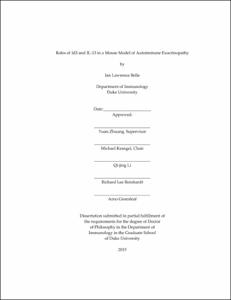 Within the field of immunology, the existence of autoimmune diseases presents a unique set of challenges. The immune system typically protects the host by identifying foreign pathogens and mounting an appropriate response to eliminate them. Great strides have been made in understanding how foreign pathogens are identified and responded to, leading to the development of powerful immunological tools, such as vaccines and a myriad of models used to study infectious diseases and processes. However, it is occasionally possible for host tissues themselves to be inappropriately identified as foreign, prompting an immune response that attempts to eliminate the host tissue. The immune system has processes in place, referred to as selection, designed to prevent the development of cells capable of recognizing the self as foreign. While a great deal of work has been invested in understanding these processes, many concrete answers remain elusive.

Our laboratory, which focuses on understanding the roles of E and Id proteins in lymphocyte development, has established the Id3 knockout mouse as a model of autoimmune disease. Id3 knockout mice develop a disease reminiscent of human Sj&#1255;gren's Syndrome, an autoimmune disease that progressively damages the salivary and lachrymal glands. Continued study of this model has yielded interesting results. These include the identification of CD4+ T cells as initiators of disease as well as the identification of the cytokine Interleukin 13 (IL-13) as a potential causative agent. However, the source of IL-13, its true role as a causative agent of disease, as well as the developmental basis for its elevated expression remained elusive.

To this end, I utilized a reporter gene that enabled me to detect cells producing IL-13 as well as test the effects of IL-13 deletion on disease progression. Using this system, I was able to identify both CD4+ T cells and &#947;&#948; T cells as major sources of IL-13. I was also able to determine that elimination of IL-13 in Id3 knockout mice was sufficient to block the development of disease symptoms, reinforcing the hypothesis that IL-13 is a causative agent in disease initiation. Finally, I attempted to better characterize the phenotype of cells producing IL-13. These experiments indicated that the T cell receptor (TCR) repertoire of Id3 knockout mice is markedly different than that of wild-type (WT) mice. Furthermore, cells bearing certain TCRs appeared to express IL-13 at dramatically different rates, indicating that certain TCRs may be predisposed to IL-13 particular effector fates.