Developmental Programming of Brain and Behavior: A Role for the Innate Immune System of the Placenta and Brain? 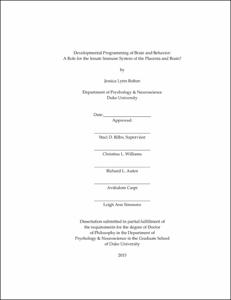 The field of "perinatal programming" has increasingly implicated an adverse early-life environment in the etiology of many chronic health problems and mental disorders. The following dissertation research is based on the hypothesis that the programming of brain and behavior by an altered early-life environment is propagated by inflammatory mechanisms in the placenta and developing brain. Offspring outcomes of two different maternal environmental exposures--air pollution and a "Western diet" (both highly relevant for the modern world)--were assessed in a mouse model in order to identify mechanisms common to developmental programming more generally.

The first set of experiments characterized the long-term behavioral and metabolic consequences of prenatal air pollution exposure in adult offspring. The male offspring of diesel exhaust particle (DEP)-exposed dams were predisposed to obesity, insulin resistance, and increased anxiety following placement on a high-fat diet (HFD) in adulthood. Furthermore, DEP/HFD male offspring exhibited evidence of macrophage priming, both in microglia and peripheral macrophages. The next experiment examined whether prenatal air pollution exposure could also synergize with a simultaneous "second hit" (i.e., maternal stress) during gestation. The offspring of mothers exposed to both air pollution and stress during gestation were more anxious as adults, but only the male offspring of this group also exhibited impaired cognition, in conjunction with neuroinflammatory changes. A further experiment revealed that prenatal air pollution exposure altered microglial maturation in a TLR4- and sex-dependent manner, consistent with the previous results. However, we found limited evidence of a placental immune response to DEP, potentially due to analysis too late in gestation.

The second set of experiments characterized the enduring behavioral and metabolic consequences of maternal consumption of a "Western diet" (HFD in combination with BCAA supplementation) prior to and during gestation and lactation. The adult offspring of HFD-fed dams were more anxious in adulthood, despite being placed on a low-fat diet at weaning. Male HFD offspring were also hyperactive, whereas female HFD offspring exhibited more severe metabolic disturbances. Furthermore, there was evidence of microglial priming and peripheral macrophage priming in male HFD offspring, similar to the prenatal air pollution model. The next experiment also found evidence of altered microglial development due to maternal HFD, in conjunction with widespread, sex-specific immune gene regulation in the placenta in response to maternal diet. Moreover, maternal HFD decreased placental serotonin production, and also programmed long-term alterations in serotonergic function in the prefrontal cortex of adult HFD offspring. Taken together, these experiments define sexually dimorphic innate immune mechanisms in the placenta and developing brain that may underlie the long-term metabolic and behavioral consequences of maternal environmental exposures.