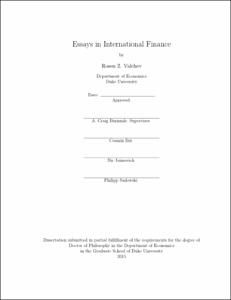 This dissertation addresses three key issues in international finance and economics: the uncovered interest rate parity puzzle in exchange rates, the home bias puzzle in portfolio allocations, and the surprising lack of correlation between terms of trade shocks and output in small open economies.

The first chapter shows that the much-studied Uncovered Interest Rate Parity (UIP) puzzle, the observation that exchange rates do not adjust sufficiently to offset interest rate differentials, is more complicated than commonly understood. I show that the puzzle changes nature with the horizon. I confirm existing short-run evidence that high interest rate currencies depreciate less than predicted by the interest rate differential. But, building on Engel (2012), at longer horizons (4 to 7 years) I find a reverse puzzle: high interest rate currencies depreciate too much. Interestingly, the long-horizon excess depreciation leads exchange rates to converge to the UIP benchmark over the long-run. To address the changing nature of the puzzle, I propose a novel model, based on the mechanism of bond convenience yields, that can explain both the short and the long horizon UIP violations. I also provide direct empirical evidence that supports the mechanism.

In chapter 2, I address the puzzling observation that portfolios are concentrated in asset classes which comove strongly with the non-financial income of investors. As an explanation, I propose a framework of endogenously generated information asymmetry, where rational agents optimally choose to focus their limited attention on risk factors that drive both their non-financial income and some of the risky asset payoffs. In turn, the agents concentrate their portfolios in assets driven by those endogenously familiar factors. I explore an uncertainty structure that implies decreasing returns to information, whereas the previous literature has focused on a setup with increasing returns. I show that the two frameworks have differing implications, which I test in the data and find support for decreasing returns to information.

In chapter 3, I address the puzzling lack of correlation between Terms of Trade (ToT) and the Small Open Economy (SOE) GDP. A SOE model typically relies on three sources of exogenous disturbances: world real interest rate, Terms of Trade (ToT) and technology. However, the empirical literature has failed to reach a consensus on the relative importance of the terms of trade as a driver of business cycles, with some papers claiming they are hugely important while others find no evidence of a relationship at all. Kehoe and Ruhl (2008) have recently shown that the weak empirical link between ToT and the GDP might be due to measurement limitations with the output series in an open economy framework. This paper merges data on national accounts with data on global trade flows for a panel of 31 countries and finds that Terms of Trade have a negligible effect on GDP but a strong effect on aggregate consumption. The evidence supports the hypothesis that ToT are important drivers of business cycles, but measurement issues with GDP obscure their relationship with real output. This further suggests that researchers should be careful when equating model output with measured GDP in an open economy setup.