Dynamic Regulation of Metabolism in Archaea 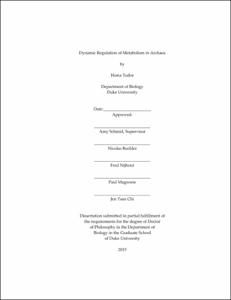 The regulation of metabolism is one of the key challenges faced by organisms across all domains of life. Despite fluctuating environments, cells must produce the same metabolic outputs to thrive. Although much is known about the regulation of metabolism in the bacteria and the eukaryotes, relatively little is known about the regulation of metabolism in archaea. Previous work identified the winged helix-turn-helix transcription factor TrmB as a major regulator of metabolism in the model archaeon Halobacterium salinarum. TrmB was found to bind to the promoter of 113 genes in the absence of glucose. Many of these genes encode enzymes involved in metabolic processes, including central carbon metabolism, purine synthesis, and amino acid degradation. Although much is known about TrmB, it remains unclear how it dynamically regulates its ~100 metabolic enzyme-coding gene targets, what the effect of transcriptional regulation is on metabolite levels, and why TrmB regulates so many metabolic processes in response to glucose. Using dynamic gene expression and TrmB-DNA binding assays, we found that that TrmB functions alone to regulate central metabolic enzyme-coding genes, but cooperates with various regulators to control peripheral metabolic pathways. After determining the temporal pattern of gene expression changes and their dependence on TrmB, we used dynamic metabolite profiling to investigate the effects of transcriptional changes on metabolite levels and phenotypes. We found that TrmB-mediated transcriptional changes resulted in substantial changes in metabolite levels. Additionally, we showed that mis-regulation of genes encoding enzymes involved in gluconeogenesis in the &#916;trmB mutant strain in the absence of glucose results in low PRPP levels, which cause a metabolic block in de novo purine synthesis that is partially responsible for the growth defect of the &#916;trmB mutant strain. Finally, using a series of quantitative phenotyping experiments, we showed that TrmB regulates the gluconeogenic production of sugars incorporated into the cell surface S-layer glycoprotein. Because S-layer glycosylation is proportional to growth, we hypothesize that TrmB transduces a growth rate signal to co-regulated metabolic pathways including amino acid, purine, and cobalamin biosynthesis. Taken together, our results suggest that TrmB is a global regulator of archaeal metabolism that works in concert with other transcription factors to regulate diverse metabolic pathways in response to nutrients and growth rate.