Grade Expectations: An Investigation of Performance Feedback, Classroom Goal Structures, and the Motivational Consequences of their Dynamic Interplay 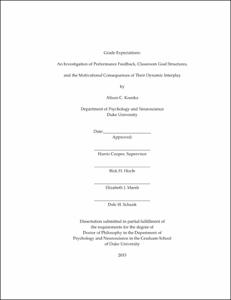 To investigate these topical questions, the current study implemented a cluster-randomized experimental design. One hundred sixty-one seventh through ninth grade students in 13 math or science classes from a single, all-female secondary school were randomly assigned by their class to one of the following four feedback conditions: (1) numeric grades, (2) evaluative comments, (3) numeric grades accompanied by evaluative comments, and (4) no feedback. Students' academic motivation was then measured on three occasions to capture its fluctuations during an assessment event: at baseline, immediately after teachers announced what form of feedback students would receive (i.e., anticipation stage), and immediately after students received their assigned form of feedback (i.e., receipt stage).

Results revealed a series of complex interactions between the stage of feedback (i.e., anticipation vs. receipt) and its form (i.e., grades, comments, grades plus comments, or no feedback). Notably, only students in the grades plus comments condition experienced a decline in self-efficacy from anticipation to receipt of this feedback. However, these students also reported an increase in their mastery goal orientation and intrinsic motivation upon the receipt of grades accompanied by comments. Students in the comments condition experienced a similar increase in intrinsic motivation. Finally, students in the no feedback and comments conditions also reported a greater performance-approach goal orientation when they received performance feedback (or lack thereof) compared to when they anticipated it. No evidence was found to support the hypothesis that students' perceptions of the evaluation dimension of their classroom goal structure moderated these interaction effects. Theoretical, methodological, and practical implications of these findings are discussed along with limitations and recommendations for future research.