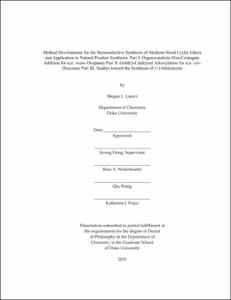 Medium-sized cyclic ethers are challenging synthetic targets due to enthalpic and entropic barriers. Methods for the stereoselective synthesis of &#945;,&#945;&#900;-disubstituted medium-sized cyclic ethers began to appear with the discovery of naturally-occurring, ladder-shaped polycyclic ethers, such as brevetoxin B, and monocyclic ethers, such as (+)-laurencin. Despite the progress made in this field, limitations remain including competing formation of smaller ring sizes and scarcity of catalytic methods. Our aim has been to develop stereoselective syntheses for 7- and 8-membered cyclic ethers which have potential for application in natural product synthesis. The C-O bond disconnection was selected for the methods described within because cyclization and stereoinduction could be achieved simultaneously. In the case of 7-membered cyclic ethers, an organocatalytic oxa-conjugate addition reaction promoted by the gem-disubstituent (Thorpe&#8722;Ingold) effect has been developed to stereoselectively provide &#945;,&#945;&#8242;-trans-oxepanes. A gold(I)-catalyzed alkoxylation reaction has also allowed access to &#945;,&#945;&#8242;-cis-oxocenes. This method has been probed for feasibility in the stereoselective synthesis of (+)-intricenyne, an 8-membered cyclic ether belonging to the C15 nonterpenoid acetogenin natural product class. These methods have the potential to become general and efficient routes to highly functionalized oxepanes and oxocenes.