Politics, the French Revolution, and Performance: Parisian Musicians as an Emergent Professional Class, 1749-1802 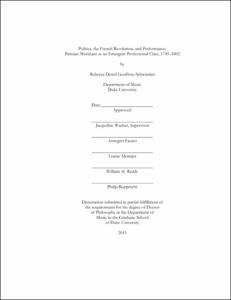 In this dissertation, I argue that musicians began to emerge as a professional class during the French Revolution (1789-1804) by mobilizing Enlightenment philosophies of music, pre-revolutionary social networks, and economic upheaval. I conceive of this phenomenon within a broad macro-historical context beginning in 1749 with Rousseau's first articulations of music and political culture, and ending with institutional changes at the Paris Conservatoire in 1802. My research applies an anthropological approach to the archives as set forth by scholars including William H. Sewell, Jr., Bernard S. Cohn, and Natalie Zemon Davis. Through archival discoveries from across Parisian archives, I elucidate how musicians capitalized upon revolutionary change to pursue personal and collective advancement as artists and professionals. This approach takes the concept of musicianship as a multivalent social category that traverses musical genres and institutions. This study contributes to the nascent movement to reincorporate economic life back into the historiography of the French Revolution and to a relational approach to the politics of expressivity and practice in musical production. The result of this study is a rethinking of previous historical accounts of revolutionary musicians as simply utilitarian.

In focusing on practicing musicians, their social networks, and their economy, I demonstrate the unique political circumstances of musical production and practice in late eighteenth-century Paris. I conclude that revolutionary politics among composers, performers, and pedagogues gave birth to a distinct form of French musical Romanticism rooted in the negotiation of rational approaches to music with the lived experiences of Revolution. This perspective locates one origin of musical Romanticism in Parisian musical institutions during the second half of the eighteenth century. In Paris, musical genius came to be regarded as a collective attribute applicable to not only composers, but also to performers. This shift toward inclusive professional musicianship constituted an evolution of musical production and aesthetics, which held profound implications for cosmopolitan nineteenth-century European music culture.