Homes of Capital: Merchants and Mobility across Indian Ocean Gujarat 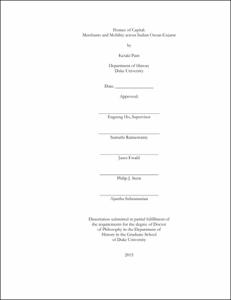 My dissertation project is an ethnographic history of "homes of capital," merchant homes located in port-cities of Gujarat in various states of splendor and decrepitude, which continue to mark a long history of Indian Ocean cross-cultural trade and exchange. Located in western South Asia, Gujarat is a terraqueous borderland, connecting the western and eastern arenas of the Indian Ocean at the same time as it connects territorial South Asia to maritime markets. Gujarat's dynamic port-cities, including Rander, Surat and Bombay, were and continue to be home to itinerant merchants, many with origins and investments around the littoral from Arabia to Southeast Asia. I argue that rather than a point of origin or return, Gujarat's merchants--many of whom are themselves itinerants from Arabia, Persia and Northwest India--produce and produced Gujarat as a place of arrival and departure: as a crucible of mobility. Gujarat's merchant homes offer a model of transregional engagement produced through the itineraries of merchants who continue to see the regions bordering the Indian Ocean as an extension of their homes.

While historians have generally studied these merchants through the bureaucratic archival records of imperial trade-companies, my project examines the yet-unexplored archives that collect around historic merchant homes. Curated by a current generation of merchant families who continue to ply old routes at the same time as they forge new ones, merchant homes offer a way to study oceanic connections from the inside-out and capital in cultural terms. Drawing on a rich array of collective and personal ethnographic and historical materials within homes, including architectural form; material objects; private journals, datebooks and travelogues; visual media; and merchant memory, my project brings into view a mercantile space-time on ocean's edge. Though emerging from concrete ethnographic and historical materials that cast powerful light on Gujarati merchant mobility in the British Empire over the course of the nineteenth and first half of the twentieth century, my account of "homes of capital" pursues mercantile imaginings across long tranches of time routed through the political economic transformations of the period stretching between the tenth and twelfth centuries. I argue that these non-linear imaginings structured by oceanic mobility exist in the interstices of imperial, colonial and post-colonial state space.

Placing merchant imaginings at the center of my analysis, my dissertation argues that the Indian Ocean was and continues to be a key spatial and temporal motivator of mercantile life. My project makes explicit the terms of this intimacy through a "chronotopic" study of merchant homes across Gujarat. Homes of capital in its broadest sense also include mercantile buildings like bridges, libraries, funerary sites, mosques and community centers, which, when linked together, created shaded pathways across the region in the face of an emergent colonial state centered on Bombay. In doing so I also reveal a more capacious mercantile subject, showing how new kinds of nineteenth-century circulations of Gujarati-language texts across merchant libraries, reading rooms and homes were embedded in and shaped a longue durée oceanic topography. My project documents the range of visual, material, textual and affective modes from within this topography through which merchants gave and give form to such a terraqueous region.