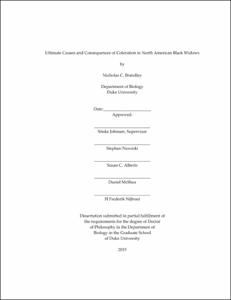 In chapter two I present data that suggest that black widow coloration not only functions as an aposematic signal to avian predators, but has also been selected to be inconspicuous to insect prey. In choice experiments with wild birds, I found that the red-and-black coloration of black widows deters potential predators: wild birds were ~3 times less likely to attack a black widow model with a red hourglass than one without. Using visual-system appropriate models, I also found that a black widow's red-and-black color combo is more apparent to a typical bird than typical insect (Euclidean color distance ~2.2 times greater for birds than insects). Additionally, an ancestral reconstruction revealed that red dorsal coloration is ancestral in black widows and that at some point some North American black widows lost their red dorsal coloration (while maintaining the ventral hourglass). Behaviorally, differences in red dorsal coloration between two North American species are accompanied by differences in microhabitat that affects how often a bird will view a black widow's dorsal region. All observations are consistent with a cost-benefit tradeoff of being conspicuous to potential predators while being inconspicuous to prey. I suggest that avoiding detection by prey --- combined with Müllerian mimicry --- may help explain why red-and-black aposematic signals occur frequently in nature.