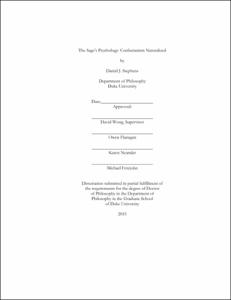 In this dissertation, I attempt to answer the question of how people can come to behave in accordance with their moral standards. To answer this question, I argue for and then apply a naturalistic approach to ethical philosophy that includes an attempt to construct both an empirically adequate account of human psychology and an account of moral cultivation that accords with that account of our psychology. I then present a part of that picture of human psychology, focused on what I call "impediments to virtue", which are the elements of human psychology that make it difficult for us to behave in ways that consistently accord with our moral standards; this picture also serves to show why we need moral cultivation methods and helps to clarify what we need them to do for us. I then argue in favor of an interpretation of the Analects of Confucius on which it is primarily focused on discussions of a method of moral cultivation, and I lay out a detailed account of what that method is and how it works. Turning once again to literature in empirical psychology, I present an argument that we have good reason to think that the Confucian method of moral cultivation as presented in the Analects will be effective in the ways intended. I then discuss the relative strengths of the Confucian method over other methods of moral cultivation that exist in the philosophical literature, including Aristotle's method of cultivating virtue in the Nichomachean Ethics, Mark Alfano's factitious virtue theory, and biotechnological moral enhancement.