Characterization of the Role of Transferrin receptor 1 (Tfr1) in the Intestinal Epithelium, Pancreas and Skin 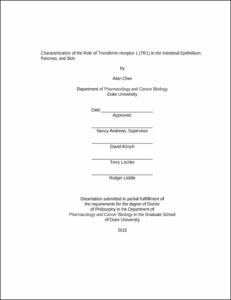 Transferrin receptor 1 (Tfr1) serves as a receptor for transferrin, an iron-binding protein in the blood, in its canonical role of iron assimilation. Tfr1 is expressed ubiquitously in many tissues and is believed to be required for iron uptake by most cells.

The Tfr1 global knockout mouse highlights the requirement for Tfr1 in erythrocyte precursors. The erythron is the tissue with the highest iron requirement, to enable hemoglobin production. Tfr1-null embryos die by embryonic day 12.5 with anemia, which has been assumed to cause lethality of the knockout mice. Due to the embryonic lethality of the mice, the role of Tfr1 has not been well characterized in other tissues in vivo. This thesis examines the role of Tfr1 in other tissues through the generation and characterization of conditional knockout mouse models of Tfr1 deletion in the intestinal epithelium, pancreas, and skin.

Deletion of Tfr1 in the pancreas resulted in juvenile death due to perturbed homeostasis of both endocrine and exocrine tissues, resulting in symptoms associated with pancreatitis and diabetes. No diabetic phenotype was detected in the conditional knockout mouse model of Tfr1 deletion specifically in &#946;-cells, suggesting that the primary effect of the loss of Tfr1 was limited to the exocrine tissue.

Deletion of Tfr1 in the epidermis of the skin caused neonatal lethality with abnormal hair follicle morphology and a significant reduction in dermal adipocytes.

These results indicate that the loss of Tfr1 has pleiotropic effects, depending on the cell type affected. Furthermore, Tfr1 appears to have non-canonical functions in the intestinal epithelium, a novel discovery.