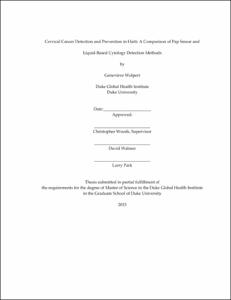 Human Papillomavirus-induced cervical cancer represents one of the most significant causes of female morbidity and mortality from cancer worldwide. Detecting HPV-related cervical disease during the premalignant treatable stage of development is critical to reduce the burden of this disease. Cervical cytology has been the primary screening tool for cervical dysplasia in the United States for decades. However in Haiti, early attempts to identify cervical dysplasia were thwarted by a high incidence of obscuring inflammation on conventional Pap smears. This study seeks to determine if liquid-based cytology screening can increase the detection of cervical dysplasia over conventional Pap smears when obscuring inflammation is present. The study population was recruited in Haiti and women underwent both types of cervical dysplasia testing; those for whom it was indicated underwent follow-up cervical biopsy. The cervical dysplasia tests were compared to each other using kappa agreement statistics with cervical biopsy as the gold standard for diagnosis. Both tests showed comparable sensitivity for dysplasia with and without inflammation-containing samples. The Pap test showed superior specificity by greater agreement with the gold standard biopsy, though the sample size was small. Interpretation of these results and application to a low-resource setting for implementation of a standardized screening regimen would require a larger sample size and cost/benefit analysis.