The Relationship between Male Outmigration and Maternal Depression in Rural Pakistan 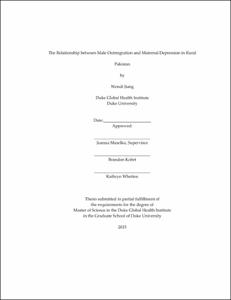 Background: Pakistan has a large and increasing burden of maternal depression which has important repercussions for both maternal and child health. This was an exploratory study with the aims to assess the differences in the prevalence proportion of maternal depression between migrant and non-migrant households and to further explore how family structure, perceived social support, and marital satisfaction affect the relationship between male migration and maternal depression.

Methods: The sample used for this study originates from a follow up study in 2013 to the Thinking Health Programme (THP) originally implemented in rural Rawalpindi in 2007. 860 women were included in the final sample and multivariate regression modeling was used to assess the relationship between male outmigration and maternal depression with the covariates perceived social support, marital support, and joint family status.

Results: Initially, there was no significant association between male outmigration and maternal depression. Once stratified by socioeconomic status, there was an association among the poor women (p=0.002) (OR = 1.63; 95% CI:1.19, 2.22), but not the non-poor women (p=0.696) (PR = 1.10; 95% CI:0.68, 1.79). Models further adjusting for perceived social support, marital support, and joint family status did not yield any significant differences.

Conclusions: Male outmigration is a predictor of maternal depression among poor families in rural Pakistan even after adjustments for social and marital support.