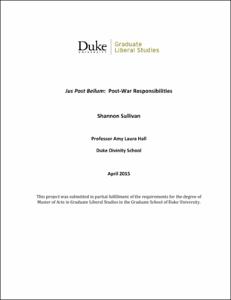 View / Download
386.5 Kb
Date
Author
Sullivan, Shannon
Advisor
Hall, Amy Laura
Repository Usage Stats
877
views
1,079
downloads
Abstract
The United States failed to consider the realities of post-war Iraq prior to entering the country in 2003. Policymakers assumed the dismantling of Saddam Hussein’s regime and defense capabilities would bring immediate peace, stability and democracy to the country. These assumptions proved false. Lack of planning, insight and resources prevented the United States from addressing the community-level conflicts that plague the Iraqi state. As a result, in 2014, a terrorist organization killed and terrorized innocent civilians in unstable post-war Iraq. Even though members of the United Nations questioned the legality of the Iraq War in 2003, the international law of armed conflict does not hold the United States accountable for the hostile environment that plagues post-war Iraq today. The United Nations Charter developed after World War II as a means for regulating and limiting violence and war does not legally define expected post-war behavior or results. Lack of post- war legal standards allows preference and self-interest to dictate occupation and reconstruction plans. The transformative reconstruction of Japan from 1945-1952 highlights this reality. The United States after World War II, motivated by the communist threat, extensively calculated and contributed to the rebuilding of Japan. Over 50 years later, the occupation of Iraq, which required an equal or greater reconstruction campaign, was not economically or politically favorable. This thesis examines these two dichotomist cases of United States’ occupations and reconstructions to elucidate the need for a critical examination of the peace-building and peacekeeping post-war period. Furthermore, the paper argues that post-war peace is not simply a legal issue but a moral matter. The tradition of Just War, which guided the United Nations’ understanding of when a war is legal and what actions during war are legal, is the moral background by which violence is ethically justified. If a war is morally justified because of its ability to bring about peace but that peace is never achieved, can the violence committed during the war be considered just? Without recognizing the moral importance of Jus post Bellum, justice after war, the international law of armed conflict has little motivation to promote legal standards for the post-war period. Amending the Just War Tradition to include a Jus post Bellum criterion can therefore begin the process of internationally recognizing the consequences of post-war behavior.
Type
Master's thesis
Department
Graduate Liberal Studies
Subject
Jus Post Bellum
Just War Theory
The Iraq War
International Law of Armed Conflict
Reconstruction of Japan
Permalink
https://hdl.handle.net/10161/10052
Citation
Sullivan, Shannon (2015). Jus Post Bellum: Post-War Responsibilities. Master's thesis, Duke University. Retrieved from https://hdl.handle.net/10161/10052.
Collections
More Info
Show full item record