The neuropsychology of autobiographical memory. 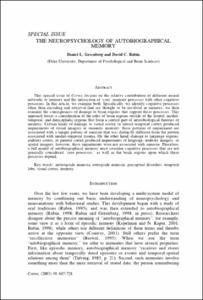 View / Download
165.4 Kb
Date
Authors
Greenberg, Daniel L
Rubin, David C
Repository Usage Stats
211
views
5,408
downloads
Abstract
This special issue of Cortex focuses on the relative contribution of different neural networks to memory and the interaction of 'core' memory processes with other cognitive processes. In this article, we examine both. Specifically, we identify cognitive processes other than encoding and retrieval that are thought to be involved in memory; we then examine the consequences of damage to brain regions that support these processes. This approach forces a consideration of the roles of brain regions outside of the frontal, medial-temporal, and diencephalic regions that form a central part of neurobiological theories of memory. Certain kinds of damage to visual cortex or lateral temporal cortex produced impairments of visual imagery or semantic memory; these patterns of impairment are associated with a unique pattern of amnesia that was distinctly different from the pattern associated with medial-temporal trauma. On the other hand, damage to language regions, auditory cortex, or parietal cortex produced impairments of language, auditory imagery, or spatial imagery; however, these impairments were not associated with amnesia. Therefore, a full model of autobiographical memory must consider cognitive processes that are not generally considered 'core processes,' as well as the brain regions upon which these processes depend.
Type
Journal article
Subject
Amnesia
Brain
Brain Mapping
Emotions
Humans
Imagination
Language
Memory
Neuropsychology
Perception
Self Concept
Permalink
https://hdl.handle.net/10161/10130
Collections
More Info
Show full item record