Memory and learning for a novel written style. 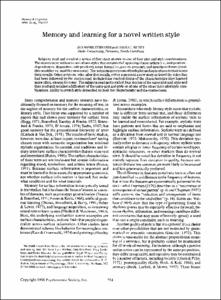 View / Download
1.5 Mb
Date
Authors
Zervakis, J
Rubin, DC
Repository Usage Stats
169
views
168
downloads
Abstract
Subjects read and recalled a series of five short stories in one of four plot and style combinations. The stories were written in one of two styles that consisted of opposing clause orders (i.e., independent-dependent vs. dependent-independent), tense forms (i.e., past vs. present), and descriptor forms (modifier modifier vs. modifier as a noun). The subjects incorporated both plot and style characteristics into their recalls. Other subjects, who, after five recalls, either generated a new story or listed the rules that had been followed by the stories read, included the marked forms of the characteristics they learned more often, except for tense. The subjects read and recalled four stories of the same plot and style and then read and recalled a fifth story of the same plot and style or of one of the other three plot/style combinations. Ability to switch style depended on both the characteristic and the markedness.
Type
Journal article
Subject
Adult
Analysis of Variance
Humans
Mental Recall
Reading
Verbal Learning
Writing
Permalink
https://hdl.handle.net/10161/10149
Collections
More Info
Show full item record