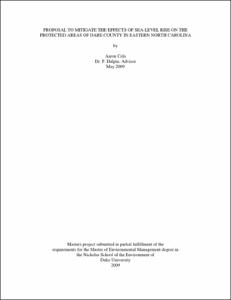 View / Download
4.9 Mb
Date
Author
Cela, Aaron
Advisor
Halpin, Pat
Repository Usage Stats
446
views
487
downloads
Abstract
Climate change is arguably the most important environmental issue to think about as the 21st century moves into its second decade. This issue is not only important in terms of limiting carbon emissions and its effect on the human race, but also in terms of how it will effect the natural environment. Many coastal areas may be affected by sea-level rise, especially those at or below 1 meter above the current sea-level. Important questions to ask are: If some extent of sea-level rise is inevitable, how quickly will it occur, and will the habitats and the wildlife occupying the lands that will be submerged have time to migrate to new suitable lands? Dare County is located on eastern coast of North Carolina, and contains a large percentage of protected land, and land that is at or below 1 meter above sea-level. Also, the entire county is dense with drainage ditches and canals. It is this researcher’s fear that these features will greatly accelerate the rate and the ultimate extent of sea-level rise for the county. Using ArcGIS, I sought to model how different hydrologic mitigation strategies (i.e. ditch filling, or ditch gating) could alter the rate or the ultimate extent of sea-level rise for Dare County. My model showed that ditch gating had little to no effect on either the rate or the extent of sea-level rise. Ditch filling, however, might well slow the rate, but was inconclusive regarding its effect on the ultimate extent. Since filling every ditch is not a realistic goal for any potential hydrologic restoration project, I prioritized eleven points in the ditch network based on previous research and expert opinion. After simulating the filling of only the ditch sections between the point, and the next ditch encountered, I was able to show an alteration of the rate of sea-level rise. Assuming that a large-scale ditch filling project is not feasible, limiting an operation to the points prioritized below would, according to my model, be effective in slowing the rate of sea-level rise in the county, especially in the early and middle stages of the process, or in a less than worst case sea-level rise scenario.
Type
Master's project
Department
Nicholas School of the Environment and Earth Sciences
Subject
Climate change
Sea-Level Rise
Permalink
https://hdl.handle.net/10161/1022
Citation
Cela, Aaron (2009). PROPOSAL TO MITIGATE THE EFFECTS OF SEA-LEVEL RISE ON THE PROTECTED AREAS OF DARE COUNTY IN EASTERN NORTH CAROLINA. Master's project, Duke University. Retrieved from https://hdl.handle.net/10161/1022.
Collections
More Info
Show full item record