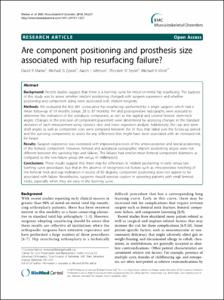 View / Download
364.9 Kb
Date
Authors
Marker, David R
Zywiel, Michael G
Johnson, Aaron J
Seyler, Thorsten M
Mont, Michael A
Repository Usage Stats
170
views
166
downloads
Abstract
BACKGROUND: Recent studies suggest that there is a learning curve for metal-on-metal hip resurfacing. The purpose of this study was to assess whether implant positioning changed with surgeon experience and whether positioning and component sizing were associated with implant longevity. METHODS: We evaluated the first 361 consecutive hip resurfacings performed by a single surgeon, which had a mean follow-up of 59 months (range, 28 to 87 months). Pre and post-operative radiographs were assessed to determine the inclination of the acetabular component, as well as the sagittal and coronal femoral stem-neck angles. Changes in the precision of component placement were determined by assessing changes in the standard deviation of each measurement using variance ratio and linear regression analysis. Additionally, the cup and stem-shaft angles as well as component sizes were compared between the 31 hips that failed over the follow-up period and the surviving components to assess for any differences that might have been associated with an increased risk for failure. RESULTS: Surgeon experience was correlated with improved precision of the antero-posterior and lateral positioning of the femoral component. However, femoral and acetabular radiographic implant positioning angles were not different between the surviving hips and failures. The failures had smaller mean femoral component diameters as compared to the non-failure group (44 versus 47 millimeters). CONCLUSIONS: These results suggest that there may be differences in implant positioning in early versus late learning curve procedures, but that in the absence of recognized risk factors such as intra-operative notching of the femoral neck and cup inclination in excess of 50 degrees, component positioning does not appear to be associated with failure. Nevertheless, surgeons should exercise caution in operating patients with small femoral necks, especially when they are early in the learning curve.
Type
Journal article
Subject
Adolescent
Adult
Aged
Arthroplasty, Replacement, Hip
Equipment Failure Analysis
Female
Hip Prosthesis
Humans
Male
Middle Aged
Prosthesis Failure
Retrospective Studies
Young Adult
Permalink
https://hdl.handle.net/10161/10410
Published Version (Please cite this version)
10.1186/1471-2474-11-227
Publication Info
Marker, David R; Zywiel, Michael G; Johnson, Aaron J; Seyler, Thorsten M; & Mont, Michael A (2010). Are component positioning and prosthesis size associated with hip resurfacing failure?. BMC Musculoskelet Disord, 11. pp. 227. 10.1186/1471-2474-11-227. Retrieved from https://hdl.handle.net/10161/10410.
This is constructed from limited available data and may be imprecise. To cite this article, please review & use the official citation provided by the journal.
Collections
More Info
Show full item record Associate Professor in Orthopaedic Surgery
Based on a recent market research survey, the U.S. demand for implantable medical devices is forecast to increase 7.7% annually to $52 billion in 2015. While orthopedic implants remain the largest segment, implantable devices are frequently used in urology, cardiovascular specialties, neurology, gynecology, and otolaryngology. With the increased usage of implantable devices, the number of biofilm-associated infections has emerged as a significant clinical problem because biofilms are oft