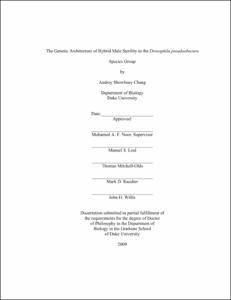 Biodiversity is generated by the process of speciation. Because biological species are defined as populations that are unable to exchange genes with one another, the study of the evolution of reproductive isolation occupies the center of speciation research. A key to deciphering how reproductive isolation evolves is to understand the genetic changes that underlie these barriers to gene flow. Intrinsic postzygotic barriers, such as hybrid sterility or inviability, are known to impede gene flow and especially lend themselves to genetic analysis because of their ease of study in a laboratory setting. Because hybrid sterility likely evolves before hybrid inviability, it potentially plays an important role in the cessation of gene flow. Yet, while their X-linked counterparts have been precisely localized, we remain ignorant of the numbers of and interactions among dominant autosomal loci that are predicted to contribute to F1 hybrid male sterility.

To address this conceptual void, I examine the genetic architecture of hybrid male sterility between the allopatric sister species Drosophila persimilis and D. pseudoobscura bogotana. First, using a large-scale backcross analysis, I fine-map autosomal QTL from D. persimilis that confer sterility in male hybrids. This fine-mapping shows that loci contributing to hybrid male sterility reside outside chromosomal rearrangements (i.e., regions of reduced recombination) in this allopatric species pairs. In contrast, these QTL do not contribute to hybrid male sterility in the comparable sympatric hybridizing species D. persimilis and D. pseudoobscura, as predicted by models that suggest that hybridizing species persist because of broad regions of reduced recombination. Next, I use a serial backcross design to introgress these sterility-conferring QTL from D. persimilis into a D. p. bogatana genetic background devoid of other alleles from D. persimilis. This introgression study tested a prediction of the dominance theory proposed to explain Haldane's rule: dominant-acting autosomal loci should interact with recessive-acting X-linked loci to produce sterile hybrid males. Surprisingly, the results demonstrated that the "composite" dominance of the autosomal QTL is more important than the dominance of individual QTL for producing Haldane's rule: epistasis among loci elevated their dominant effects on sterility such that individually-recessive-acting autosomal QTL can contribute to F1 male infertility. Finally, using recombination to generate independent lines bearing only small segments of the identified QTL regions, I examine whether single or multiple loci within these regions contribute to the overall effect of hybrid sterility. While the effect of one QTL depends on epistasis between several loci within that small region, the effect of the other QTL appears to derive from a single genetic factor. These results suggest that estimates of the number of genes that contribute to reproductive isolation are at best, likely too low and, at worst, unattainable with the mapping resolution attainable by standard backcross and introgression approaches.